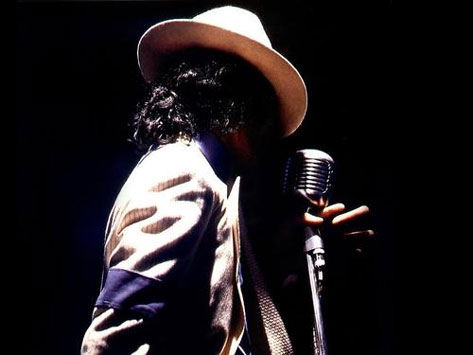 I dare you to defy your every carnal desire and not dance to Michael Jackson's "Smooth Criminal" whenever it's played. Or at least nod your head and do the Robot a bit. It's that catchy, that vigorous bass line; one of the most instantaneously recognizable riffs in all of music. Simply humming that melody alone is like yawning or looking up at the sky--everybody around you will catch it and join in before they know it. Maybe that's the reason it's also been covered so many times, most notably by the rock band Alien Ant Farm in 2001.

A true testament to the behemoth that is Bad, "Smooth Criminal" was the seventh song out of ten released as a single from the 1987 album. And as signature and indisputably iconic a Michael song as it'd become, it "only" peaked at #7 on the charts in the latter part of '88. After recording somewhere in the vicinity of 30 songs with co-producer Quincy Jones for Bad, "Smooth Criminal" was a last minute inclusion. It was originally titled "Al Capone," which explains the '30's gangster aesthetic treatment for the video and the Moonwalker video game.

And "Smooth Criminal" is indeed one of those Michael songs that can't, at this point, be separated from the aesthetic. The white suit with the white fedora is as definitively Michael as the red "Beat It" jacket or the sparkly "Billie Jean" socks. The video, edited from a 10-minute interlude in the movie Moonwalker, depicts Michael as a gangster vigilante in a nightclub in the '30s. It doesn't exactly have anything to do with the lyrics, he's moreso telling a story here in between dazzling flappers, blowing dust in thug's faces and shooting cats through walls. But what it does have is one of the most famous Michael dance moves ever; I'd say it's second to only the Moonwalk, that gravity defining forward lean. Assumed to be a bit of film trickery when first performed in the movie, "the lean" is even more amazing seen live--something pulled off by Michael and his dancers using special patented shoes and stage equipment. How many other pop stars can you think of that have literally patented dance moves? I'll wait.

Make no mistake, though, as much of a straight up jam as this song is, the subject matter is pretty dark. Michael wasn't one to shy away from a darker storyline--"Dirty Diana" and "Billie Jean" are hardly about walks in the park. But "Smooth Criminal" is unabashedly violent; telling the unfortunate tale of a serious crime involving a woman named Annie. Lyrics about "bloodstains on the carpet" and "she was struck down, it was her doom" generally aren't this feel-good. And honestly, to this day, I really would like to know if Annie is okay. Sounds like Annie got murdered, so I'm not sure why we're still asking if she's indeed okay. All that aside, I'ma say this is the best song about abduction and/or possible murder EVER. And one of my favorite MJ songs EVER, natch.