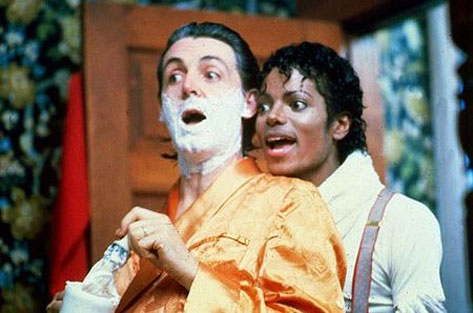 Standing here
Baptized in all my tears

As with most of us, when a new Michael Jackson video debuted back in the day, it was an event. I'm talking, stop-everything-that-you're-doing-while-the-entire-family-crowds-around-the-good-television-type event. Even though I was but a wee-likkle youth at the time, I can clearly remember the first time I watched Paul McCartney and MJ's video for "Say Say Say." OMG, there was so much that my five-year-old self wanted in that video! Between La Toya's (then) beauty to the idea of having Michael playfully vie for my attention, I was sent spinning into daydream heaven. Every time the video would come on, I would grab my towel and prance around the house, while an imaginary Jackson and Paul McCartney sang to me.

Twenty-seven years later, it still has the same effect. While I now fight the urge to grab that towel (winning only sometimes), I always find myself transported back to that feeling of excitement and childhood longing that I felt.

Out of all of hiss duets, this ranks as one of my faves, thanks to the chemistry between Jackson and McCartney. When the two got together, musical magic was made. And although their friendship would later fall apart, we're happy that the duo at least left us with gems like this one.