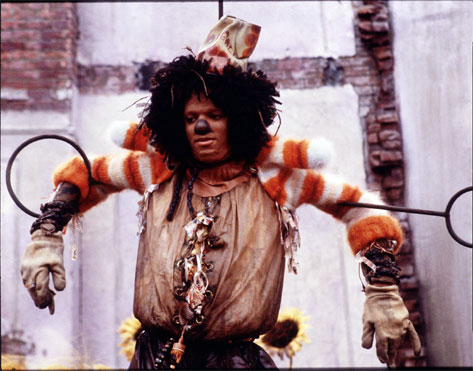 Before he sang "Leave Me Alone" or "They Don't Care About Us," Michael Jackson told us how "You Can't Win" when it comes to a system of injustice. This politically-steeped song was, ironically, one of the central musical numbers in the '70s motion picture The Wiz where MJ made his acting debut as he matured from being the pre-pubescent lead of the Jackson 5 to a highly successful solo artist.

Despite what you may read on Wikipedia or other movie sites about the success or lack thereof of the movie, I can tell you that the movie theaters in DC were packed as folks sat shoulder-to-shoulder to watch this highly-anticipated movie featuring the glamorous Diana Ross and the very popular Jackson. It was 1978 and I was barely four-years-old, forced to sit on my mother's lap to watch the movie because the theater was sold out and there was no seat available for me. Unfazed, I didn't care. I was going to see Michael Jackson, who, at that time, like now, was my number one favorite singer of all time. On the screen, costumed as the ingenious Scarecrow, Michael grabbed my starry-eyed attention as he opened his mouth to croon the song "You Can't Win," which is, hands-down my favorite song from the movie's soundtrack. Only he could have a full theater of people groove to an upbeat song about being frustrated and kicked around. That must have been the reason why the song was written specifically for MJ to sing, replacing the song originally sung by the Scarecrow character in the stage play that the movie was based on. Released as a single in January 1979, "You Can't Win" was released as the second single from The Wiz: Original Motion Picture Soundtrack, a double album distributed by Motown Records in September 1978 that I still own to this day on vinyl.

As I listen and sing along to this tune, nothing is more haunting as we think of Michael's death and listen to the trailing chorus that sings, "You can't break even, you can't get out of the game." However, we know, that like the Scarecrow, triumph is inevitable and like his straw-filled character, Michael showed us how it was not only possible to win, but create a legacy that lives on for a lifetime.