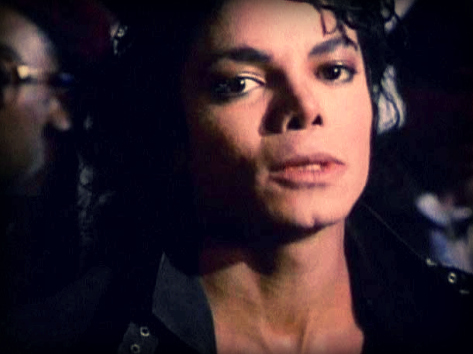 Your talk is cheap
You're not the man

If anything, the album Bad affirmed that brooding beneath his genteel, soft-spoken persona, Michael Jackson was volatile, grimy and anxious. The four orchestral strikes that open the song "Bad," alerted us to this better than any rambling character profile ever could have. This was not Thriller II.

Those four beats were palate cleansers. Sharp and cutting, they did the work of preparing us for the new Michael. They awoke us from the lull of "The Girl Is Mine," "Billie Jean" and the familiar. "Bad" was the new Michael: furious and idealistic, innovative and consistent, fed-up and hungry for more.  Almost everything about that period of Michael's career and life is present in those strikes.

The song revels in its own funkiness, dropping right into it as a part of the extended intro. There's grit, it moves, the chord progression is laid bare under his snarling vocals. It's the musical equivalent his rhetorical burst of "Who's bad?"

Essentially, "Bad" is all about confrontation and self-affirmation. The basic concept, played out in the Martin Scorsese-directed music video to greater effect, is that a young man returns to his old neighborhood to confront his old friends and past before moving on to better things. When he demands to be slapped in the face if you don't like that he wants to change the world, he means it. Not just as a character in a song but as a man whose identity was growing more linked to humanitarianism and whose outlook was unapologetically (and naively) idealistic. So, get in his face.


TAGS:  audio, martin scorsese, michael jackson, top 50 michael jackson songs
Previous: To Prince The Internet Is ‘Over,’ But Something In The Water Does Not Compute Next: Morning Soul: Can I Get A Kiss Goodnight