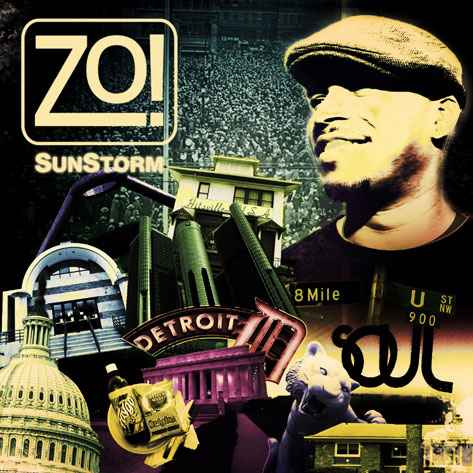 If you're a passionate music lover like I am, then you already know that there's nothing worse than waiting patiently for an album to drop, only to realize that it was nowhere near as good as you'd hoped it'd be. Well, that is so not the case with Zo!'s highly-anticipated album, SunStorm. We've seem glimmers of his greatness on his 12 previous releases, namely 2009's tantalizing just visiting too EP, but on his first full-length project on The Foreign Exchange's homegrown imprint, he proves what we had all hoped: that he's one of the most exciting things to happen to music in a minute.

On SunStorm, the Detroit area-bred producer and multi-instrumentalist tapped into his uber-talented circle of friends, including his FE Music cohorts Phonte, YahZahrah and Darien Brockington. Tay kicks things off on the album's opener, "Greater Than the Sun," where he reminds us of life's simple pleasures. What follows next is nearly an hour's worth of musical pleasure.

On the divine "All is Well with Love," songstress Chantae Cann seduces your senses with her soothing voice. I was first introduced to this young lady on the Jaspects' The Polkadotted Stripe and was just as entranced by her voice then. Monica Blaire's turn on "Make Love 2 Me" manages to be both sexy and sweet at the same time. Her voice is sure to draw comparisons to Jill Scott on this song. She packs a wallop of a sensual punch into the album's 10:36 long closing opus as she pleads with her lover to make love to her with "intention and purpose."

Even with so many guest appearances from some vocal heavy hitters, the main attraction on this album remains Zo!'s plush musical production. While some producers may stumble when their musical ambitions find them dabbling in different genres, Zo! expertly navigates vast musical terrain. From the jazzy notes found in the Jesse Boykins III-fronted "If I Could Tell You No" to Lady Alma's broken beat influenced "Free Your
Mind," it's clear that Zo! possesses the enviable ability to hopscotch his way through multiple genres, all while managing to maintain a cohesiveness not normally found on such ambitious projects. Though it's clear that his musical influences are vast, Zo! manages to craft a sound that is distinctly his own. So sit back, relax and prepare to be taken on the best musical ride your ears will take all year.