Why Badu & Other Performers Need Not Be Tardy For The Party 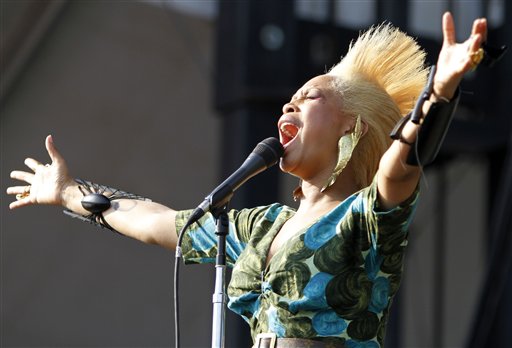 I didn't attend Erykah Badu's concert this past weekend at Chastain Park Amphitheater in Atlanta, but I, like many of you, heard the news that the power was turned off at 11 pm, hindering her from finishing her show and disappointing legions of fans who were present. And I'm sure they were mad. Who wouldn't be pissed to have Ms. Badu, who was front and center rocking a golden mohawk singing her new material, classics, some old school hip-hop and even a little Motown, cut off in mid-groove? But, here is the thing: Ms. Thang was late. She was not just five minutes late, or even a half hour late. She was a full hour and some change tardy for her own party.
Center
After the bounce

Her opening act, Bilal, had come and gone and her band had even started warming up the audience before she got to the stage. That was nice, but that was no Badu. When she finally did take the stage, she didn't even acknowledge her lateness. No "sorry." No  "my bad." No nothing.

I'm sorry, but that is just unaceptable. Accuse me of having high expectations or what have you, but I think that being late is one of the most disrespectful things an artist can do to their paying audience. Furthermore, not only should they be called out about it, but fans should make a point of choosing wisely when it comes to attending their next concert, particularly if its not a free event. I say all of this as someone who is pretty much too distracted by my own life to really delve into the why of what made you late but is more concerned with are you sorry you were late and for you not to do that ish again. From what I hear, though, lateness is a common thing with Badu at her concerts and she's not likely to change that up anytime soon. Remember, this is, after all, a woman who once said that "time is for white people."

I have to admit, if I had gone to that show to see Erykah, I would have been one of the main ones pissed and disappointed that the concert was cut short due to her tardiness. For one, I don't like waiting. This should be of no surprise if you read my Dissection of a Concert post about Janelle Monáe's concert  earlier this year in DC. I love Janelle like a play sister, but shorty's lateness was unbearable in that mosh pit of sweatiness that is the Black Cat.

Secondly, concerts are economic and time investments for me. I'm not rich by any stretches of the imagination, so paying for a concert is money coming out of my household. I'm a working mom who chooses very specifically when it comes to what evening activities I attend. My attendance at a concert means time spent away from my child. It also means making time that replaces something else that is part of the normal routine that will have to be made up for later. My time is very important and valuable, as I'm sure the time of many folks who attend concerts is. While we are making transitions or arrangements often to attend an artist's concert, here we are met with an artist, who is being paid to perform yet fails to live up to the expectation of the business transaction we as the concert goer agreed to. If artists would recognize their arrival time as just as important a business responsibility as their sound and overall appearance is, then lateness would probably not be as common an issue as it is.

A change in behavior is due to happen, though. I'm sure those artists who have problems with timeliness will be stepping it up soon, mostly because their pockets are hurting. Music is not selling like it used to. Sales dropped 25% from $38.6 billion in 1999 to $27.5 billion in 2008 according to industry experts. As the internet continues to be a place where music is shared freely (or rather cheaply), concerts will be the only route for many to recoup any sort of profit necessary to offset production and other back alley costs that push many a mainstream artist towards financial ruin. For the indie artists, concerts are the only pathway to profit most times, if only to show your skills live so that folks will be compelled to shell out money for your CD. I think it's only right though that the expectation is in place, for being on time is also a trait of some of our best artists. The Stevie Wonder concert I went to and wrote about this past spring is a testament to his professionalism.

As step down from my soapbox, and turn to you Bouncers, I ask you seriously: Is a performer's tardiness to a concert an issue for you?