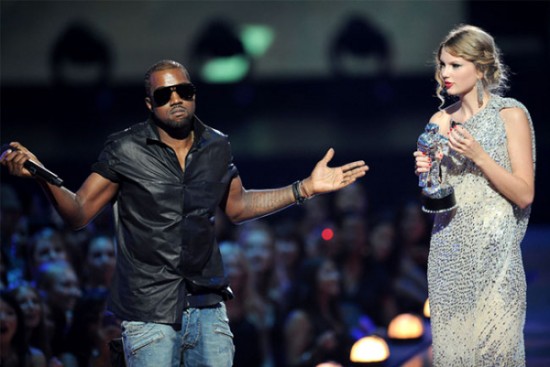 I know I was in the minority when I didn't send Kanye West hate vibes for last year's much-talked about interruption during the MTV VMAs when he rained on the parade of country singer Taylor Swift as she accepted her Moon Man. I'm sorry, but I agreed with him. Beyoncé's "Single Ladies" video was way more popular (not to mention better) than anything Swift has produced in her lifetime. Everyone from the cast of Glee to exiled nuns in Siberia recorded their own version of the Bey's anthem, mimicking everything from her onesie to her (borrowed) dance moves. At that video awards show, if anyone needed to be given an award for a successful effort, then Beyoncé should have had that in the bag. Right before Kanye got up and bum-rushed the mic, I was thinking that Taylor's win had to be some sort of juvenile prank. After, Kanye's rant, I still think that Taylor's win was more insulting. But, this post isn't about rehashing that drama. And, based on a Twitter spiel by Mr. West himself this past weekend, apparently Kanye is not up to rehashing it either.
Center

Kanye got up close and personal on the social networking site, spilling his emotions and some personal insight on his actions last year around this time during the VMAs and even remarking about events as far back as when he ranted during the Hurricane Katrina telethon five years ago when he told us what we already knew that George Bush didn't care about Black people. Here is a sample of what he wrote:

"...I've been straying from this subject on Twitter but I have to give it to you guys raw now."

"If you google Asshole my face may very well pop up 2 pages into the search."

"Some people say...Why worry about 'the haters?'"

"This is bigger that just the concept of haters."

He talked about how he felt knowing that people wished that he would die, and he asked us to think critically and take a moment to wonder about who benefits when he is in the news and held up in infamy. For a celebrity who remarked less than a year ago that he wouldn't dare be on Twitter, seems like he is using the online platform in the best way he knows how--as a mouthpiece for his very vocal personal convictions. I would suspect that this is way cheaper than therapy.

Oh and, of course, it's a great way to preface a drop of a new song. Check out this new one, "Devil in a New Dress," that he posted online for the public last Friday.