Patti LaBelle Reports For Duty To The Cast Of ‘FELA!’ 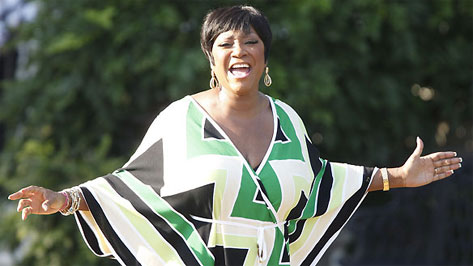 The number of winners and close-to-winners from the show American Idol who are now on Broadway or in a popular off-Broadway production is astounding. Fantasia starred in The Color Purple, Taylor Hicks went on to star in Grease, Tamyra Gray is in Rent and Clay Aiken starred in Spamalot. It would seem that Broadway has become that midpoint now between stardom and obscurity for some who are still fresh in their pursuit of celebrity. So when news that a true American idol like Patti LaBelle hit the rumor mill that she would be taking a prime role on Broadway after an astounding almost 50-year career as a recording artist, you take notice.
Center
After the bounce

Today the Grammy award-winning, multi-platinum singer joins the cast of Jay-Z, Will Smith and Jada Pinkett Smith's highly-successful Broadway musical FELA! that is based on the life of Afrobeat master Fela Kuti. Ms. Patti will be taking over the role of Fela's
mother, Funmilayo Ransome-Kuti, for a limited engagement with the production.

"I am both thrilled and honored to be
joining the cast of FELA! on Broadway," Patti said in a post on the play's Facebook page. "Fela's mother, Funmilayo,
was a strong, truly inspiring woman and I am so privileged to be able
to pay tribute to her on the Broadway stage."

Though we know Ms. Patti as a singer with an incredible range, the legendary vocalist has a truly prolific acting career that includes appearances on sitcoms like A Different World and the short-lived Out All Night and stints on stage in plays like Your Arms Too Short to Box with God and Chicago. Can she fill the shoes of Ms. Ransome-Kuti? I don't doubt it, and I'm looking into a trip to NYC and FELA! tickets now.