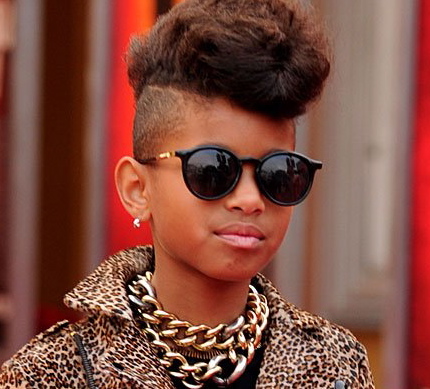 Aside from her parents' penchant for giving the paparazzi an example of the richest, happiest Black couple in recent memory, all I knew of Willow Smith was that her mother allowed her to get a mohawk and dress in ways I could only dream of as a child. Given Jada Pinkett Smith's disastrous foray into music, my mind was already recoiling in horror as I imagined what her daughter would have to offer us in that department. But as many of you have already found out, "Whip My Hair" is the lick. It singlehandedly smashes anything Rihanna may have released in the past year without the shameful aftertaste of trying to like something that someone who shamelessly opens her legs ad nauseum on stages around the world has produced. Granted, this is the first thing we've heard from nine-year-old Willow, but I'm definitely loving it so far. Whip you some after you press play.


TAGS:  audio, jada pinkett smith", rihanna, willow smith
Previous: You ‘Know’ Lisa Fischer Can Do No Wrong Next: John Legend & DJ Reflex ‘Wake Up’ Early To Talk About The Past And Future