Cheri Dennis Is Planning A ‘Take Over’ With New Hair & Name 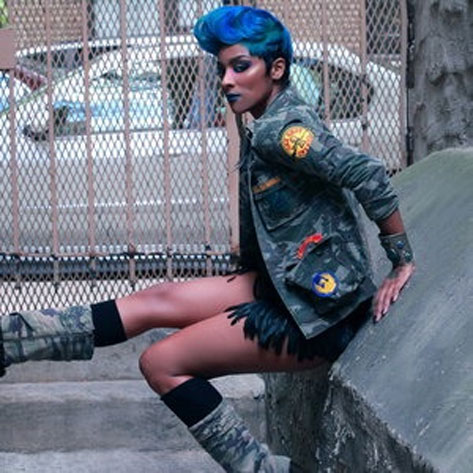 It looks like Halloween has started early for Cheri Dennis. That new look that she's sporting in the photo above isn't a costume. No, kids, since getting kicked off of Diddy's Bad Boy Island, gone are Cheri's normal-colored locks for a blue hue that Crayola hasn't even named yet. But all of you wannabe's better back down before you get smacked down if you're thinking of copying her style because according to her Twitter page, her new website is PleaseDontBiteMyHair.com. Girl, bye, with your non-working URL. In addition to her Blue's Clues coif, the singer has also adopted a new moniker, Cheri Coke. I don't know if that's short for Coca-Cola or cocaine, but if it was the latter this would all make so much more sense. In the midst of all of this extraness, however, Cheri also has some new music that she's pushing out to the world. The single "Take Over" features Dennis Coke singing to an ex that he's bringing too little too late if he wants her back. It's typical R&B fare, but it's actually an enjoyable groove and that hair dye has not affected her voice. It's doubtful that this will catapult Cheri to superstardom much less into VIP at the club, but bless her heart for still trying. Check out the track below and hit the bounce to peep her singing it live from her bedroom.

TAGS:  audio, cheri coke, cheri dennis", coca-cola, cocaine, crayola
Previous: Cee-Lo To ‘Lay It Down’ With Lil Jon Tonight On Fuse TV Next: DMV Bouncers: Get Ready To Celebrate The ‘Master Of The Mix’ Weekly With The ‘Party Rockers’