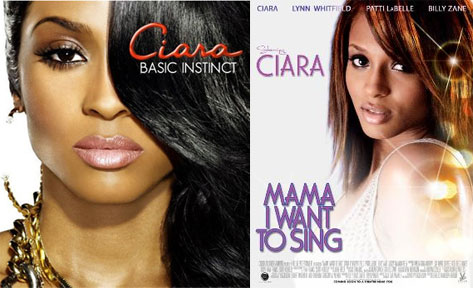 Last week Ciara dropped a new video for the song "Speechless" from her album Basic Instinct, which is supposed to arrive one of these days. I say that only because her project has been pushed back too many times to count and the album is now allegedly scheduled for release on November 29th. We'll see about that. While I'm not the biggest Ciara fan, I have been following her with interest this past year when I got word that she was going to be starring in the film version of Mama, I Want to Sing. Though I'm convinced that I'm one of probably five people who actually give a hot damn, I was wondering what the skinny was on the release of the movie because there has been an eerie absence of information to be found on the web to answer any queries about why the project has not been released yet.

The film is an adaptation of the gospel stage play by Vy Higginsen and Ken Wydro and is based on the life story of singer Doris Troy who was discovered by James Brown. In the movie, Ciara stars as the main character based on Troy, Amara Winter, who rises to celebrity as a soul singer while her mother, played by Lynn Whitfield, is gaining celebrity as a church pastor. While I never saw the play myself, I grew up hearing the commercials on the radio for the play and was interested in seeing the movie for nostalgia's sake. I also am interested in the rest of the cast, including Patti Labelle, Hill Harper, Ben Vereen, Marvin Winans and Juanita Bynum.

With the recent spate of movies based on stage plays coming from the Tyler Perry factory making it to the big screen, it would be a shame if Ciara's film debut is shelved with no release in sight. And if it's not feature film material, then can we at least get it direct-to-DVD? All in all, I can't help but think that the delays for Basic Instinct and Mama, I Want To Sing are not a good thing. What gives, SoulBouncers? Are people still feeling Ciara or is she teetering on the edge of irrelevance?