Kandi Needs To ‘Leave’ It Alone 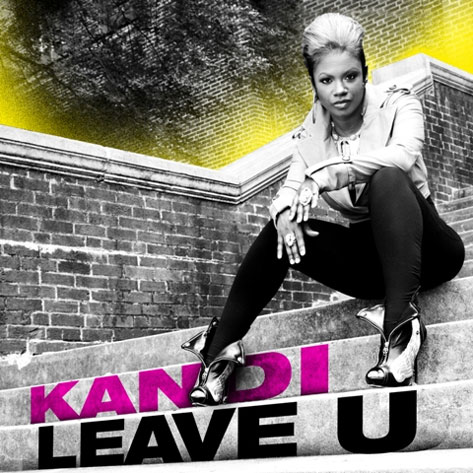 There was once a time when Kandi Burruss, Tameka "Tiny" Cottle, the other one and the other one changed
the game as part of Jermaine Dupri's harmonizing quartet, Xscape. Sometimes they dressed like boys.
Sometimes they supported Atlanta's favorite male-to-female rapper, Da Brat. But they always sang.
Throughout their tenure, their vocals were solid enough to back skinny Mariah, Patron Saint of Black Choirs,
on occasion. By the late '90s, musical trends changed, top lips revolted and the ladies were relegated to
songwriting, backing vocals, and bearing children for rappers. Cha Cha Slide to 2010. Kandi and Tiny are
back on the scene with reality shows and new attempts at musical relevancy.

Using her role on Bravo's The Ratchet Housewives of Atlanta, Kandi, having written "No Scrubs" for TLC and a slew of hits for Pink, is dropping "Leave U," the lead single for the upcoming album, Kandi Koated.
Fans of the show may have heard new material in her showcase earlier this season. This is not a huge
departure from the painful tunes heard on the air. Recorded atop an industrial washing machine during
its final spin cycle, "Leave U" finds Kim Zolciak's sidekick warning an inattentive lover that she is...about
to leave. Genius.

On to the video preview. Once you get over the NeNe Leakes impression in the second promo shot,
you'll notice all the three staples of lesser female R&B videos: a love interest straight off the set of a Black sitcom, reality show or direct-to-DVD movie, a Negro wearing shades indoors and two-tone colored and cropped weave. I blame Lady Gaga. She's convinced brown girls that gravity-defying hair, shoulder pads, lace and asymmetrical designs equal success. (See: Monica.) Le sigh.
Available on iTunes now, the official video for "Leave U" hits 106th and Plantation this Thursday. Fly above all your haters and watch this trainwreck of a sneak peek below.