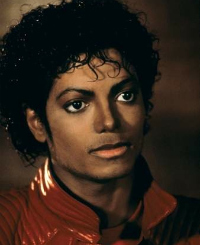 I guess people are getting really comfortable with Michael Jackson himself being out of the picture of Michael Jackson's music because a lot of people have decided to get cute. Such creativity greenlit development of a full-length feature film of the "Thriller" music video, despite how much logic must be suspended in order to think that is even in the same galaxy as a good idea. While it was rumored that those helming the increasingly unhinged TV show Glee might be doing an MJ tribute episode, the show has reconsidered. Get this, there might just be a "Thriller" mash-up with another as-yet-unnamed song. What do you think, SoulBouncers? Should Glee pay homage or should they leave the King alone? [H/T: NYM]
Right


TAGS:  glee, michael jackson
Previous: Morning Soul: Sim Simma, Who Got The Keys To My Beemer? Next: The Mixologists: Soulrific One’s ‘Class Of 1990’