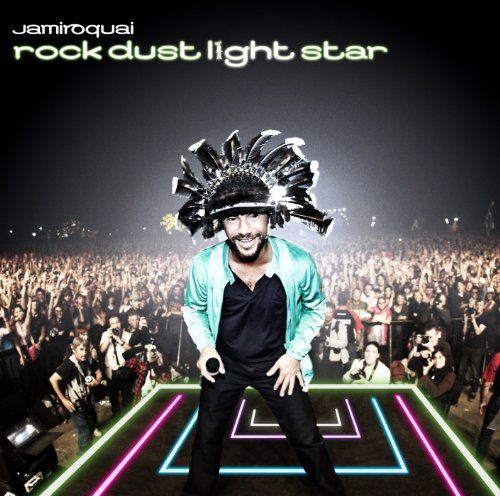 Since the 1993 release of their debut album, Emergency on Planet Earth, Jamiroquai
has been dazzling fans with their disco, funk and acid-jazz blend of music. Seventeen
years later, the group is still keeping it funky with their latest release, Rock Dust Light
Star
, their first album in five years. The group strictly adheres to the old adage, "If it ain't
broke, don't fix it," by altering little of the sound that first catapulted them onto the
forefront of the acid-jazz invasion of the '90s.
Center

We find front man Jay Kay still singing about love, societal ills and such. Yet
and still, it works. Much like a Sade album (but without the decade-long wait), Rock
Dust Light Star
sounds both familiar and fresh at the same time. For music listeners
who prefer that their artists either keep up with trends or constantly switch up their
sounds, it may feel too much like the Jamiroquai of old. You won't find any Outkast-like experimentation here. Many of the songs on this albums could've easily fit right in
on 1994's The Return of the Space Cowboy or 1996's Traveling Without Moving thanks
to dramatic strings, funky basslines and horn arrangements that clearly take a page
from '70's compositions. But it's precisely that consistency and the refusal to stray from
their signature sound that makes Rock Dust work best.

Recorded with live instrumentation in Jay Kay's home studio, the album does differ
slightly in that it has a more organic feel than most recent Jamiroquai projects. Easily
one of the album's best tracks, "Hey Floyd," is also one of the more musically complex
songs the band has ever birthed. As Jay Kay warns a wayward Floyd about getting his
shit together, it's the music that steals the show. The track manages to stretch across
several genres, effortlessly flowing from a sparse, Afro-Brazilian-esque beat into a
string-heavy-disco-ready number before transforming again into a reggae-influenced
rhythm. While for some artists, this hodgepodge mix of various musical sounds may
come across as a muddled, confused mass of sounds, in the hands of this band, it's
damn near brilliant.

"Lifeline" is another gem, a theatrical number complete with striking horns and strings
that have a nostalgic feel to them. It's one of those songs that I feel like I've heard
before but where, I can't quite put a finger on. Add in a few well-placed handclaps and I
was an instant fan. Other highlights include "Hurtin," an angst ridden guitar and synth-
heavy ode to love lost, while the mellow "Two Completely Different Things" takes a
different approach to the same topic. Which ever song you choose to like, there's no
denying that for Jay Kay and his crew, a little musical familiarity is definitely a good
thing.


TAGS:  jamiroquai, jay kay
Previous: Listening To This Janelle Monàe Track Won’t Be A ‘Fight’ Next: What We Warned You About: Quincy Jones’ Aural Assault Has Begun