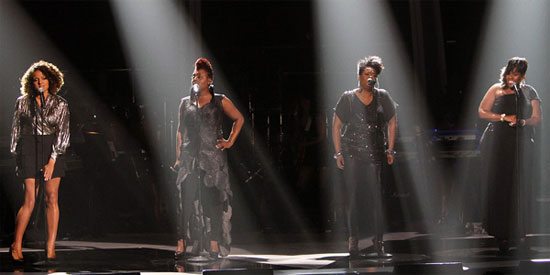 Earlier this year, I saw a video of Lizz Wright, Nina Simone's daughter Simone and the incomparable jazz vocalist Dianne Reeves singing a tribute to the legend by covering her classic "Four Women." I was convinced that their version was the most perfect I had ever heard, even more stunning, dare I say, than the original itself.

Fast forward, and the song "Four Women" is fast becoming one of the most covered songs of 2010. It's found its way onto the soundtrack of this week's most talked about new movie releases, For Colored Girls,and it was a featured song on last night's BET special, Black Girls Rock. Performed by an unexpected grouping of Kelly Price, Marsha Ambrosius, Jill Scott and Ledisi (who performs the song on the For Colored Girls soundtrack), the song is a perfect addition to an evening that centered around highlighting the contributions of Black women to the entertainment industry. While I've always felt the song was like a play's introduction to characters, but always sort of unfinished, leaving the characters as one-dimensional archetypes, the performances by each woman added shading that was signature to their own sound and image. Simply mesmerizing. Hands down, though, Ledisi stole it with her brilliant ending. Check it out for yourself below and share your comment with us.