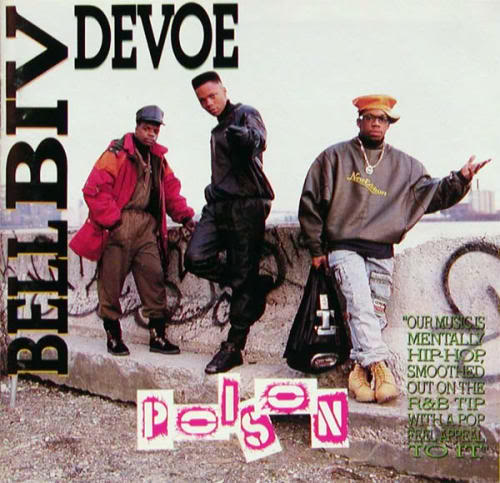 New Edition had their share of major success in their heyday, even way past their end-of-puberty expiration date. Bobby Brown was a certified superstar, although his voice couldn't hold any weight compared to Ralph Tresvant's. As a child, after hearing "Is This The End," my ears perked up after Ricky Bell broke the song all the way down, at least according to my 8-year-old sensibilities. From that moment on, I always checked for Ricky's vocals, even after Johnny Gill emerged as the second lieutenant in the revamped New Edition of the late '80s. That being said, when Bell Biv Devoe decided they wanted to become a group and release an album, I, like many of my friends, was highly skeptical. This was mainly because, besides Ricky, none of us really never knew musically what Michael Bivins or Ronnie Devoe did anyway. All of that changed once a song named "Poison" was released, nay unleashed, upon the public.

This is not to say that I never thought that Michael or Ronnie weren't great at their dance steps, nor contributed in any way to any production or arrangements of any New Edition songs, but when you're a fresh-faced teen eager for heartthrob meat, if you're not that hot in the looks department, you better be able to sing. "Poison" turned that whole notion on its ear. Not only was it a certified jam, but this represented an extension of what we were missing post-"On Our Own" Bobby Brown: raw, oversexualized, hip hop beats with an R&B edge and just the type of thing to make my parents uncomfortable. Perfect.

Once everyone got over "Poison" and quite honestly, I don't think most of us ever will, there really were several standouts from the album of the same name. "B.B.D. (I Thought It Was Me)?," "Dope!" and "Do Me!" all provided more than enough punctation marks and reasons to dance a bit more raunchy at school dances than we needed. But for those willing to dig deeper and leave the adolescent antics alone along with those big butts and tantalizing smiles, found several well-crafted slow jams that migrated from our matte black, extended-play, Maxell cassette tapes onto CD mixes and onto MP3s such as "When Will I See You Smile Again?" and "I Do Need You." In other words, as doubtful as many of us were that B.B.D. could even survive past the explosion that "Poison" was, we quickly learned that our doubts were unfounded when Poison gave us the "mentally hip-hop, smoothed out on the R&B tip with a pop feel appeal to it" that was promised on the album cover.

All has been pretty quiet on the B.B.D. front as of late despite whispers of them recording new tracks and me freaking out when I randomly spotted Ricky Bell at a party two years ago. Though they may still be known by some their endless finger-pointing and inside-out clothing--as a response to Kris Kross' backwards style--they still hold a place in history for making a short-lived yet indelible mark in our history. Although "When Will I See You Smile Again?" is still a favorite of mine that I still play with some regularity to this day, "Poison" still knocks as hard as it did when it first dropped in 1990. Enjoy.