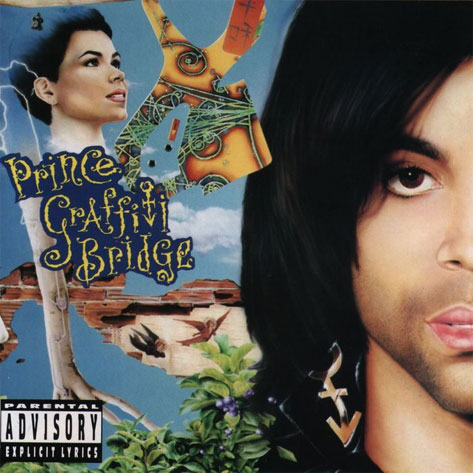 After making the movie Purple Rain, Prince shoulda probably just quit while he was ahead on the film tip. Not saying that his subsequent theatrical releases didn't have their entertaining moments, but nothing could quite possibly measure up to the 1984 classic. Not 1986's Under the Cherry Moon. Not 1987's Sign 'O' the Times. And surely not 1990's box-office clunker Graffiti Bridge. Released in November of that year, the movie Graffiti Bridge was supposed to be a sequel to Purple Rain but the only thing it had in common with that movie were the character names, everything else wasn't even in the same league as his big screen debut. I don't remember much about Graffiti Bridge because I hated the movie so, and in the 20 years since its release I can probably count on one hand the amount of times that I've seen it and still have a couple fingers left over. But the soundtrack is another matter.

You often hear people say that "the book was so much better than the movie" when books are adapted for the screen. However, how often do you hear that said about a movie's soundtrack? That was definitely the case with the Graffiti Bridge soundtrack (and the Under the Cherry Moon soundtrack, truth be told). "Thieves In the Temple" was the big hit from this album, but tracks like "Elephants and Flowers," "We Can Funk" with George Clinton, "Joy In Repetition" and the sexed up slow jam "The Question of U" were not to be slept on.

Although the soundtrack was better than the film, it was far from Prince's best work up to that point and continued to signal a shift in his sound. Sandwiched in between his soundtrack to the film Batman and the far superior Diamonds and Pearls, Graffiti Bridge featured 11 songs by Prince with six more from artists who starred in the film -- The Time, Mavis Staples and little Tevin Campbell who contributed "Round and Round," which went on to be the then 14-year-old's second hit song before his debut album was released the following year. On GB was when we first heard the term "New Power Generation" on the song of the same name, which would go on to be the name of his backing band and define that era of his career. By 1993, Prince was embroiled in an infamous battle with Warner Brothers Records and changed his name to Love Symbol #2 in a move that baffled many but, of course, there was a method to his madness.

Twenty years later, I wouldn't exactly call the Graffiti Bridge soundtrack a classic, and it's definitely not on the level of 1999, Purple Rain, Parade, Sign 'O' the Times or Lovesexy, but it has more strong moments than weak spots. If Prince does make anymore movies, then rest assured that if nothing else that the soundtrack will be the hotness -- and that his hair, makeup and wardrobe will be hotter than yours, ladies.