John Legend & The Roots’ ‘Shine’ Gets Re-Imagined By Ahmed Sirour 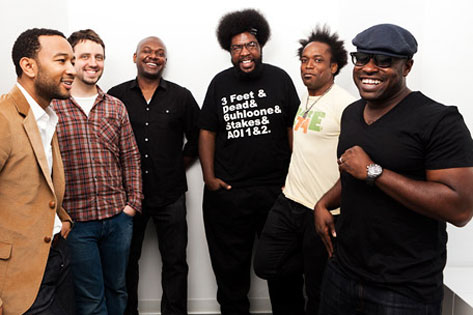 Riding high from the success of their collaborative album, Wake Up!, John Legend & The Roots are taking some time to help others shine with a remix contest for their GRAMMY-nominated single "Shine." Entries are pouring in from around the world, and you can listen to what's been submitted thus far on Indaba Music's website. Our good friend writer/producer/musician Ahmed Sirour, who has seriously gotten on the map in 2010 with his work with DJ Spinna and remixes for SoulBounce faves Eric Roberson and YahZarah, is giving us a sneak peek at his work-in-progress with "Shine (Re-imagined by Ahmed Sirour)." Rearranging the original and adding a pleasant bed of strings, Sirour will be remixing this version to submit to the contest, which wraps in January after a public vote. Remixing your own re-imagining? Now that takes talent. We can't wait to hear what Ahmed's final submission will sound like, but in the meantime we'll get lost in the beauty of this.
Center