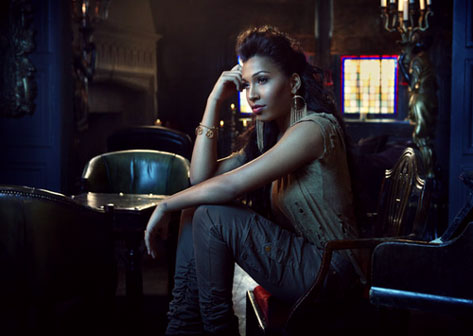 One of my favorite artists to step on the scene in 2009 was Melanie Fiona. Although her debut album, The Bridge, didn't showcase just how talented she is, it was a good introduction to the Canadian songbird and gave us the hit "It Kills Me." However, with her sophomore set, The MF Life, on the way in early 2011, I'm hoping that she gets better material to showcase her voice and personality, which are both phenomenal. Does that happen on the freshly leaked lead single, "Gone & Never Coming Back"? Yes and no. Mel sounds good here, that's without question. But I have to admit that it took me a few listens to get into this song. Upon first listen, it was slow background music. On the second listen, I took the lyrics about a lost love in and gained a greater appreciation for it. On the third listen, I started to like the song. I'm sure that I'll love it in about a month. Perhaps you'll feel the same way about the ballad after you listen for yourself.
Center


TAGS:  audio, melanie fiona
Previous: Dezaray Dawn’s ‘Chameleon’ Gets Taken To Stilnovo’s House Next: Morning Soul: Tell Me What I Gotta Do To Please You