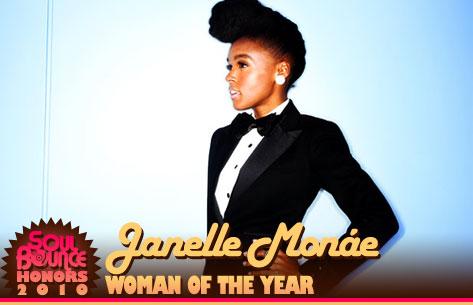 To say that Janelle Monáe's success over the course of this year has been deserved is an understatement. Building on her 2007 release Metropolis: Suite I (The Chase) and the curious murmurs of when she signed to Bad Boy, she danced up on the haters and made many of them converts to her own School of Funky Futurism. Maintaining her well-earned reputation as one of the best live performers around through numerous television performances and a virtually nonstop intercontinental tour schedule (opening and headlining), everyone's favorite android really carved out a space for herself in a more mainstream music consciousness in 2010.

While her triumph over the increasing banality of pop music is no surprise to those of us who've been following her since the early '00s, it really is remarkable to consider. Her unwavering commitment to the fictitious world and characters she's created, her trust in audiences to take the journey with her, her earnest and obvious passion for music and dance that bucks against the norms that too frequently dominate the charts, these traits make her an anti-pop star. And the deeper into her own convoluted narrative she explores, the more experimental and abstract she might just get.

Watching her electric performances on David Letterman and Ellen DeGeneres' shows, bursting with the energy and charisma and talent to outshine a baker's dozen of more boring counterparts, it was easy to forget all of the wild sources and genre-bending sounds. The woman is captivating--a true vocalist and performer. Uniformed in menswear and armed with the willingness to defy expectations, she has been a thrill to watch tip on the tightrope in this, her year. What's more exciting is the idea that we're somewhere near the beginning of her career and that based on the sound of things, there is much more to come from our 2010 Woman of the Year.