SoulBounce’s Class Of 1990: Brand Nubian ‘One For All’ 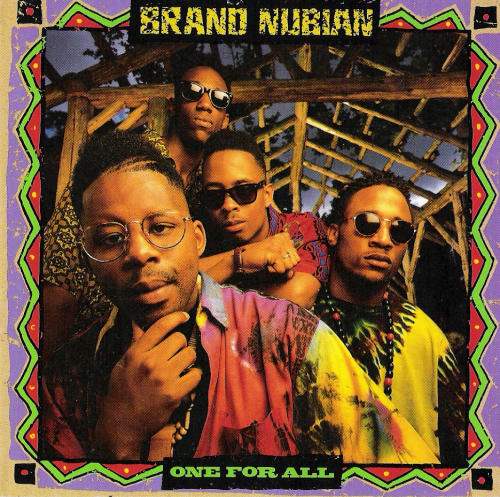 My fondest memory of Brand Nubian's One For All comes courtesy of an exchange I had with a good friend of mine who was schooled in the knowledge of the Nation of Gods and Earths. One day while walking home from our jobs as youth counselors, he asked me what I was listening to. I replied that I had been listening to One For All, like, all the time and he looked at me with a look of amusement and wonder. "I never thought that someone like you would be into them." I was a bit shocked but also amused since my persona at that time may have exuded Cosby kid, but my heart yearned for the rawest beats imaginable.

In fact, I fondly remember playing hooky once from school in order to witness the video for "Slow Down" being filmed mere blocks from my home. Although being within earshot of a video being filmed means that the very song you might have loved likely you'd end up loathing after hearing it for the 200th time, by the time the video premiered on Video Music Box, myself and all my friends were all over it. The track used a familiar sample from Edie Brickell & New Bohemians' "What I Am" that we all knew and loved. The quartet that made the song from New Rochelle, NY came with not only heavy-hitting beats, but three men, Grand Puba, Sadat X, and Lord Jamar, with knowledge-laden rhymes who easily spun tales of intrigue within my mind and a DJ, Alamo, whose skills were well-respected in and around the New York City area.

True to form, the music that dominated urban New York radio was a mix of hip hop, house, R&B and reggae. Unsurprisingly, One For All featured all of these elements in one perfect package. The standout emcee of the group, Grand Puba, emerged early as a leader of sorts. Not only was his verse arguably the best of their seminal ode to various forms of greed "Slow Down" and placed strategically last, but he had two solo tracks on the album, the New Jack laced "Try To Do Me" and the most excellent reggae-inflected "Who Can Get Busy Like This Man" with Uptown NYC's own Positive K. This move proved to be an omen of sorts since, almost immediately after this album was hailed as one of the greatest contemporary hip hop albums of its time, Grand Puba left the group amidst internal strife. No matter. Lord Jamar and Sadat X teamed up with DJ Sincere for In God We Trust, which yielded hip hop staples and oft-repeated phrases "Punks Jump Up To Get Beat Down" and "Love Me Or Leave Me Alone." Grand Puba went on to release Reel To Reel and a was then on a track with a little-known singer known as Mary J. Blige who had previously sang hooks for Father MC and background vocals for Jeff Redd.

In fact, all of the members of Brand Nubian went on to have well-respcted careers whether in music (Grand Puba released the solid Retroactive last year), acting (Lord Jamar had recurring roles on Oz and The Sopranos) or teaching (Sadat X). Although their union was short-lived, their meeting was kismet while this album was nothing short of awesome. That being said, let's all take a collective pause to nod our heads to the classic and poignant "Slow Down." Enjoy it now just as you did back then.