To say the past 12 months of my life have been tumultuous is an understatement of mountainous proportions. I cried many times, I felt desperation and pain, but I also felt immense joy and hope, and music gets a lot of the credit for bringing me back to life over and over again. It's been said before in many different ways, but music is utterly transformative if you let it take you over the way real music lovers do. I clung to my iPod like a child to her blanket this year so picking only 10 songs was mad difficult. But I am pretty confident these tracks do a good job of telling the tale of my personal journey in 2010. Let's see if you agree. 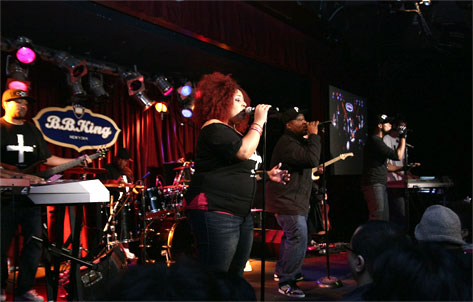 The Foreign Exchange feat. Chantae Cann: "Laughing At Your Plans"
There are a lot of gems on the introspectively somber Authenticity, but "Laughing At Your Plans," featuring newcomer Chantae Cann, is a wistful, folksy standout for The Foreign Exchange conglomerate. There are a lot of heavy moments on the album; "The Last Fall" is actually gut-wrenching if you've ever felt the sting of love lost. But "Laughing At Your Plans," is the "life goes on" shrug of realization and acceptance after the heartache. I was fortunate enough to see them perform this track live in October, and Cann's unique voice is a dream. It floats on clouds. I expect greatness from this soulful chanteuse in 2011. 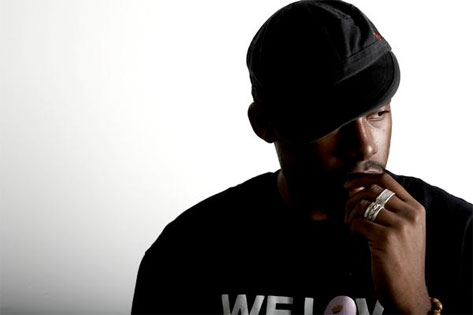 Flying Lotus feat. Thundercat: "MmmHmm"
Heads are forever trying to categorize producer, Adult Swim soundtracker, and great-nephew of John and Alice Coltrane Flying Lotus' music. Is it dub-step, hip-hop, trip-hop, electronica, and/or jazz fusion? Is he Dilla-like? Is that a harp harmonizing with a harmonica? Perhaps it's this exercise in futility that in part underrates his sometimes spastic, sometimes silky smooth, otherworldly ministry of ambient sound. Although his newest full-length effort, the succulent "space opera" Cosmogramma, failed to get nominated for a GRAMMY, which sent FlyLo into a bit of a temper tantrum on Twitter, it's gorgeousness is not to be denied. And the trippy lusciousness of "MmmHmm" is something to behold indeed. Featuring Thundercat of the Sa-Ra collective on bass and vocals, it's psychedelic, soulful, and sensuous. 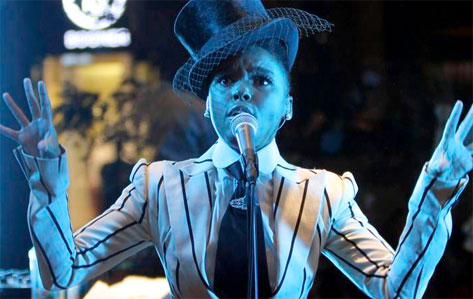 Janelle Monáe: "Say You'll Go"
It would be exceedingly difficult to do any kind of top songs of 2010 list without including at least one track from our Album of the Year, Janelle Monáe's The ArchAndroid. And the achingly gorgeous "Say You'll Go," followed very closely by the amazing "BaBopByeYa," is my favorite song. Maybe not necessarily the "best" song on an album chock full of stunningly epic music, but my favorite and arguably the most timeless. It's layered, visual, sweeping. I feel it in my spine, y'all. It makes me yearn, ache and fiend for love that lasts lifetimes. "Our love will sail in this ark; the world could end outside our window/Let's find forever, and write our name in fire on each other's hearts". Additionally, there is no delicate fading out at the end. Monáe doesn't do that. "Say You'll Go" ends like all the greatest Broadway songs do--with a choral denouement fitting of the most dramatic and devout heroine. 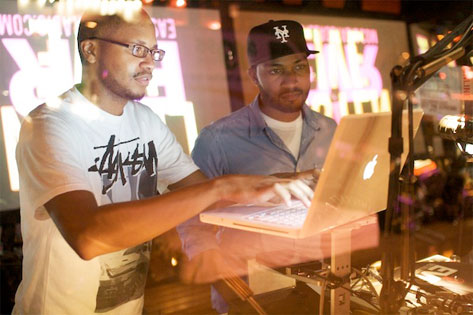 The Stuyvesants: "Took Her Curls Out"
It should be no secret that The Stuyvesants, the coupling of music lovers and musicians Darien Victor Birks of Flwrpt and Allan Cole (aka Algorythm), produced some of my favorite instrumental yumminess this year. Their debut collection, Brooklyn's Finest, which I wrote about back in June, was released just in time to provide the soundtrack my sticky hot New York summer, and the tawdry groove "Took Her Curls Out" was a naughty highlight. The orgasmic gasps and moans of a woman in the throws of something awesome are as much an instrument as the boom bap of the bass and the funk of the guitar. Nod your head to this, smile and blush. Runner up: "Oooh Baby" 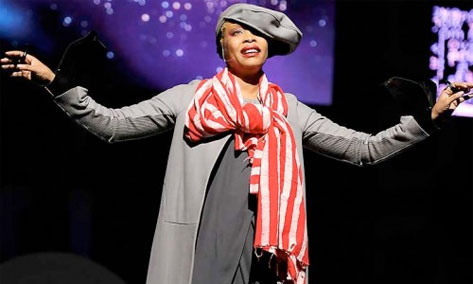 Erykah Badu: "Out My Mind, Just In Time"
"Out My Mind, Just In Time," the closing track to Erykah Badu's magnificent New Amerykah Part Two: Return of the Ankh, starts with a no-nonsense little piano flourish and quickly unfolds into a lush three-part opus of progressive rabbit hole tumbling and grandiosely understated heartache. Act one is a stripped down ditty about the dizziness of a love we're desperately--and ultimately futility--holding onto despite sinking realizations about it's shelf life. Act two is the bulk of the track and finds Badu pleading with herself as much as she warns her lover--"Not this time, not this time, not this time, not this...no...". Act three is the instrumental, piano-laden wrap-up and also the end to an album that is as much about love as its predecessor was political. 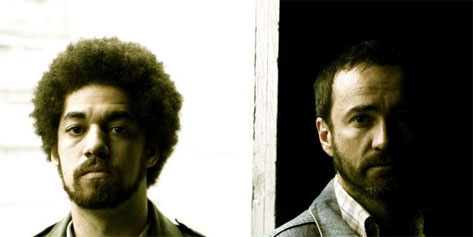 Broken Bells: "Mongrel Heart"
I welcomed dynamo Danger Mouse to my radar around the same time most people did, the effing awesome-to-this-day mashup compilation The Grey Album. But I was way off in assuming Brian Burton was "just" a producer, and Gnarls Barkley was proof positive this man was as dope a songwriter and musician as a beatmaker. As if it wouldn't have been enough to stop there, though, his newest partnership, Broken Bells, with James Mercer of The Shins, cements his place amongst the most sought after musical chameleons of the past decade. Their self-titled debut is pretty emo affair, but if my list thus far hasn't been an indication, I'm a pretty emo girl. The opening track, "The High Road" soars, but my pick is "Mongrel Heart." It's futuristic folk meets spaghetti western music from the year 1965 or 2025, take your pick. Mercer may be the front man here, but Burton's deceptively simple musicianship goes hard. I love it. 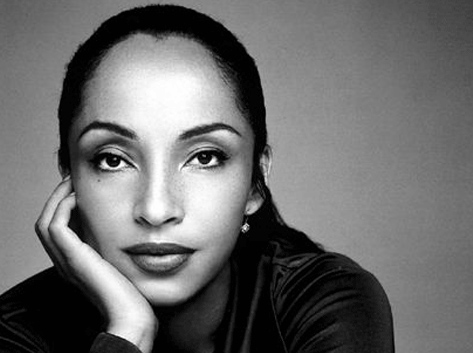 Sade: "The Moon and the Sky"
That the elegant and perfectly elusive Helen-Folasade Adu graced us with music this year, a full decade after Sade's last studio album, Lovers Rock, is still making my head spin a bit. Soldier of Love may not have lived up to the impossible expectations 10 years built for some, but it just as rightfully belongs in the Sade collection of alluring, heavenly music as any of their other classics. It was definitely one of my favorite releases this year. The hauntingly beautiful, textural "The Moon and the Sky" has me revisiting questions I ask myself every time I hear a Sade song: just what kind of a life does Ms. Adu live on the planet made up of monarch butterflies and kush smoke that she resides on when she's not gracing Earth with her presence? And what manner of mere mortal would ever break her heart? And how magical am I, then, to relate to these lyrics so profoundly, so deeply and still exist to relate? "So why did you make my cry? Why didn't you come get me one last time?" Indeed. Runners up: "Soldier of Love" & "Babyfather" 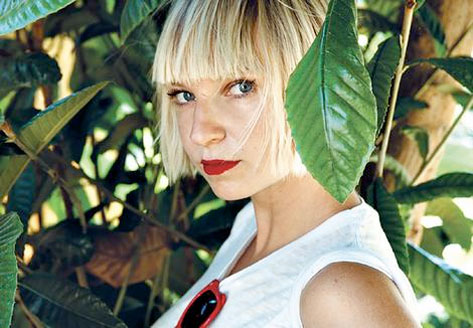 Sia: "Clap Your Hands"
As if being Australian and bisexual and covering Olivia Newton-John and John Travolta's "You're The One That I Want" with fellow oddball Beck didn't make her interesting enough, singer and songwriter Sia, who most recently penned four songs for Christina Aguilera's Bionic album, had the gall to release one hell of a feel-good album this year. "Clap Your Hands" is a sunshiney Saturday afternoon with the most coquettish of your girlfriends, singing into a hairbrush and shaking your hips in the mirror. I am an absolute sucker for an infectious dance jam. If a 25-year-old Madonna (who Sia covers later on the album with "Oh Father") existed in 2010, her music might sound a lot like this song--pop funk with a riot grrl exuberance. 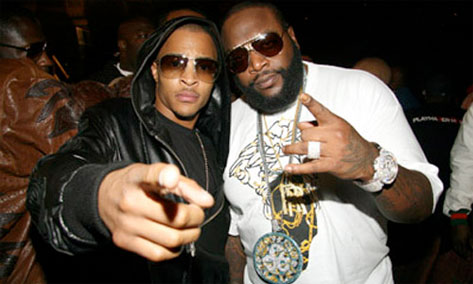 Rick Ross feat. T.I., Jadakiss & Erykah Badu: "Maybach Music III"
No list of mine would be cohesive without some shamelessly braggadocios, orchestral rap shit, and Rick Ross' "Maybach Music III" is just that. Produced by J.U.S.T.I.C.E League, as were the first two "Maybach Music" installments, part three boasts contributions from a lusciously smooth Erykah Badu, T.I., and one of my favorite emcees and the only non-Southerner on the track Jadakiss. Rozay's verse is typically dramatic; another confident tale of big boy dreams realized. Monster verses from all but I melt over the instrumental alone. RAW$E! 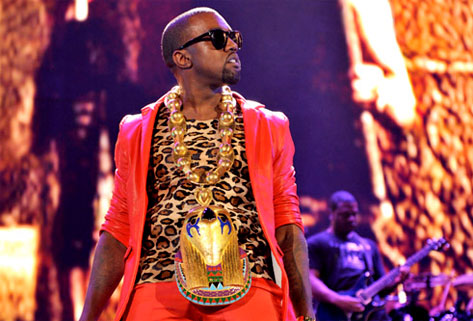 Kanye West: "All of the Lights"
Don't disrespect the celebratory orgy "All of the Lights" by playing it anything but loud. This one is stadium status. It's New Year's Eve celebratory music. Kanye West put out one of the best albums of 2010 hands down, and maybe the best music of his career. What's so epic about My Beautiful Dark Twisted Fantasy is not the various covers, from stunningly self-aware (King Kanye impaled on his own sword) to disturbing (Kanye mounted by a nightmarish phoenix thingie), nor the writhing ballerinas that joined him for his all-white and blood red SNL performances, nor that strange "Runaway" short, although all those things contributed. What I'll remember most about this album is that Ye gave half of it away FO' FREE and it still sold half a million in the first week. That's the "Power" of G.O.O.D music, I guess. I'll be ringing in 2011 with "All of the Lights" which amasses such an eclectically grand amount of uncredited cameos (Rihanna, Elton John, and Charlie Wilson to name a few) it's an exercise in futility to name them all.