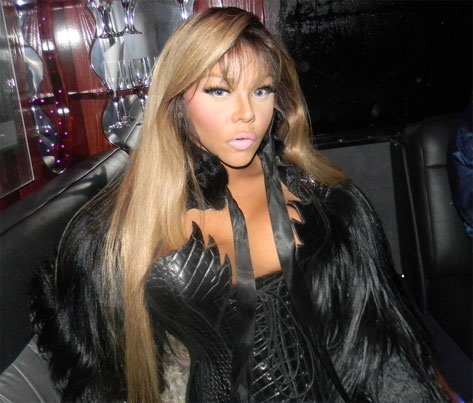 Well, it's here. The long-awaited new single from the Delusional Barbie
herself, Kimberly Jones aka Lil Kim aka Kimmy Blanco aka Cocaine Cowgirl aka Unclaimed Jumpoff Numero Uno, has floated down from heaven and made its way
onto the internets. "Clap Clap," the lead
single from the International Rock Stars mixtape, dropped this week, and well, yeah, congratulations are in
order. Whereas her underwhelming "Black Friday" was no doubt born in the
heat of a bleaching cream fume-induced rage, this track is a little
more on target. No, she has not returned to top lyrical form, but this
song doesn't sound like it was recorded on a Brooklyn fire escape either. And
that's an accomplishment. So, clap clap, indeed.
Center

Kimmy's assembled a group called The International Rock Stars, or The IRS for short, who I presume are a crew of glorified weed and chalk dust makeup carriers and yes men. They convene over the horn-heavy beat, and, ultimately, the track distances her from her lyrical peak in the late '90s. Sure, her new henchmen, undoubtedly trained to stroke Kim's wigs ego join in the fun. But like Kim's musical contributions in the last decade, they aren't worth mentioning. Oh, and if you're not up on your goon vernacular, "a round of applause" = a round of gunfire. Get it?

She even takes a second to speak directly to the haters:

"It's Kimmy Blanco. You already know I got shooters, and our clips is full in case you want some more. I think I hear an encore."

The Queen Bee has officially crawled off her throne and is slinging mud and wackness among commoners. Now more than ever, the hook from extinct girl group Jade's 1994 single rings true: Kim, "5, 4, 3, 2, yo time is up."