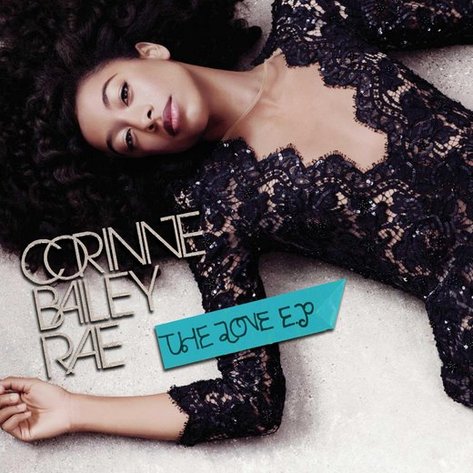 Corinne Bailey Rae has beaten some overwhelming odds. It is challenging for successful UK artists to
translate their success to the US, but she did it. It is not easy to follow up a stellar debut album with
an equally impressive second album, but she did it. It is extremely difficult to move forward after the
tragedy of a loss, but she did that, too. It a major challenge to release an EP of other people's songs,
and leave people wanting more of your voice, but she is doing that now. A year after debuting her
new band with her previous album, The Sea, she graces us with The Love EP, her
appropriately-titled new project.
Center

There was, understandably, a melancholy theme in The Sea highlighted by a lot of minor keys, reminiscent lyrics, and
slow melodies. Similar to The Sea, The Love EP also has a theme, and this year's theme is love. The EP
contains a seemingly random, but beautifully eclectic compilation of songs, including Prince's "I Wanna
Be Your Lover,"
Belly's "Low Red Moon," Bob Marley's "Is This Love," Paul McCartney's "My Love," and
Doris Day's "Que Sera Sera." The most captivating thing about The Love EP is that regardless of how
different the tracks are, Corinne's voice remains consistent. Unique, soft, soulful, and sweet, her vocal
delivery makes each song her own. The versatility across genres and range of each selection
reminds us of her impressive and unique vocal style.

On "Is This Love," the reggae hit becomes a jazzy, slow, piano-driven number. Corinne avoids its original pop-rock sound of "My Love," and she transforms it with a beautiful acoustic execution.
She makes "Que Sera Sera" a slow and soulful groove, and it is the album's most enjoyable selection, as evidenced by
the massive applause included on the track (a recording of a live performance in DC) and what appears
to be a call for an encore, which might explain why it is significantly longer than the other tracks.

Corinne's only questionable move was opening with her weakest track. Prince's "I Wanna Be Your
Lover" does little to demonstrate the originality and beauty of her signature sound. I would have liked
her to make that song her own, as she did with every other cover on the EP. Instead, she pretty much
mirrored Prince's classic version. I would have loved to have heard her band jam out more on the cut,
rather than echoing the original '80s synth-pop sound. But, we can't be too mad at her for this attempt. Prince covers
are risky. It's a tough task, much like so many others she has accomplished, and I applaud her effort.

Overall, this collection of songs is a very enjoyable piece of work. Corinne Bailey Rae's growth between projects continues to be evident with this EP, and she continues her trend of delivering music that distinguishes her signature sound. The Love EP is a pleasurable and pleasant surprise and will suffice to hold her fans over until she releases a new
album of original material. Until that time, go ahead and get some Love in your life.