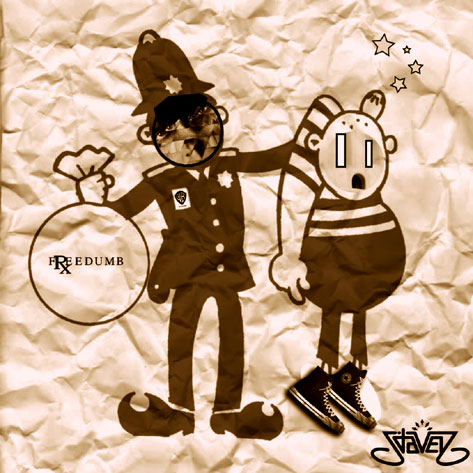 Well, it's here. No, Jesus hasn't sent a cease and desist letter to Lil Kim. J*DaVeY's long-awaited Evil Christian Cop: The Great Mistapes EP has arrived. After a solid release date was given last week, I counted down the days and stalked Jack's and Brook's Twitter and Tumblr pages for any indication of an exact time of release. Whereas 2009's Boudoir Synema: The Great Mistapes dropped at midnight, this time fans were reduced to randomly refreshing pages in hopes of seeing an eventual update. Once it did surface, Evil Christian Cop was just what us J*DaVeY fans needed. The five-song set is bookended by music you may already be familiar with, though. Their cover of Nirvana's "Smells Like Teen Spirit"--which grows on me with each subsequent listen--opens the EP and the upbeat favorite "Lazy Daze" closes out. The juicy meat within, though, is magical.
Center

Have you ever pressed "play" on a song and had to quickly press "pause," realizing that you just weren't ready for what you about to receive? That's what happened on the first spin of "Quicksand." I hit "play" and 15 seconds in found myself cursing into the sky at nobody in particular, wondering aloud, "Who the f--k do they think they are?" Going beyond the fact that the mother of my imaginary chilluns, Jack Davey, sounds like early Christmas, the production is delightfully schizophrenic. And awesome. And that's what I've come to love about J*DaVeY. Top that off with an surprise verse by LA-based dopester Def Sound. This hit me just as hard as their "Fight The Daylight" did. Brilliance. Whoa.

I didn't want "Raincheck" to end. Like Boudoir Synema's "Get Together," it drips with sex, and everything about it works for me. Even more than it being near-perfect overall, the atypical song structure is perhaps the strongest asset of this masterpiece. Is this the hook? Another verse? Who the hell cares? It's a long and passionate wet dream. After about three nice drinks, you'll find me in a corner, head cocked to the left, engaged in a one-man Butterfly contest to this track. It's serious. And, no, you can't join in.

Although it would have been great to hear a mastered version of fan favorite "Dollar or More," I can certainly wait until golden unicorns descend out of the sky amid a shower of four-leaf clovers to deliver their full-length debut New Designer Drug some time this year century.