‘Turn’ This Proh Mic & Coultrain All The Way Up 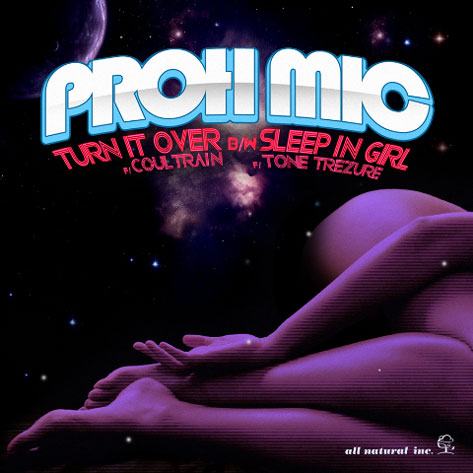 From the moment you hit play on "Turn It Over" by Proh Mic featuring the funkdafied vocals of Coultrain, you won't be able to sit still. At least that was my experience when the electronic thump traveled outta my speakers, into my ears, and up jumped my boogie. Coultrain, who needs a new album like yesterday, lets his freak flag fly and sings of laying pipe just right, commanding his woman to climb on his shoulders, and wanting to persuade her insides. Aight den. Proh Mic, a Seattle native who is one-third of the Hawthorne Headhunters, is prepping for the release of his upcoming album, Rhythm For Days, on the All Natural label, which will also drop a limited edition 7" tomorrow featuring Tone Trezure on the song "Sleep In Girl" on the B-side of "Turn It Over." If Proh's song with Tone is anything as crazy, sexy, cool as this Coultrain joint, then both of these cuts wil stay in heavy rotation for a while.
Center


TAGS:  audio, coultrain, hawthorne headhunters, proh mic, tone trezure
Previous: Ayo Is ‘Gonna Dance’ And You Can’t Stop Her Next: Will This Journey Cover Have You ‘Believin” In R.L.?