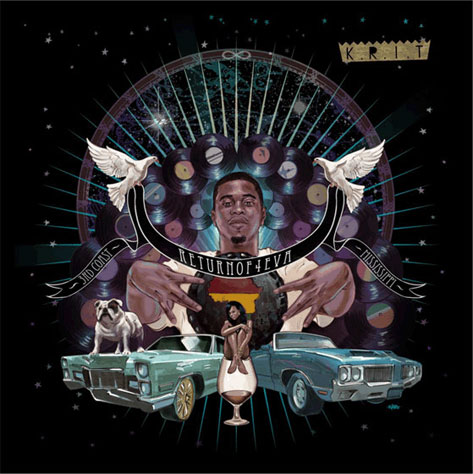 With the almost deafening buzz surrounding last week's release of Big K.R.I.T.'s ReturnOf4Eva, it may seem as though the 25-year-old
Mississippi-born emcee came out of nowhere. However, the reality is that K.R.I.T.'s (whose moniker means "King Remembered In Time")
current success has years of hard work, set backs, and a tenacious will to thrive behind it.
The lead single "Dreamin'" is a testimony to this, managing to capture both the beauty and
the honesty that lies in the universal struggle to make it. And while this track packs a
powerful inspirational punch, don't be fooled. This 21-track album is very well balanced; so
while some songs will move you, others will make you want to move. Case in point is the
hype heavy "R4 Theme Song," which urges you to "Say it like you mean it" all while you
search for any floor to hit so you can shake at least a bit of what your mama gave you.
Center

There are also some surprise guest appearances on this album such as Raheem DeVaughn
on "Players Ballad" reminding us what we love about his voice as it blends smoothly with
the beats and rhymes of the song. We also hear from Ludacris and Bun B on "Country
Shit" however K.R.I.T. stands and delivers very well all on his own. On "Another Naive Individual Glorifying Greed and Encouraging Racism," it is the lyrical content of the song that creates a foundation
for a very insightful look at race and politics.

Perhaps the most striking thing about this collection is that it is in fact an album. While K.R.I.T. has put out numerous mixtapes, this
project follows the critical acclaim of 2010's K.R.I.T. Waz Here, which was also a quality
project that was also offered to fans for free and makes me lament some of the musical
purchases I have made. Like it, love it, or leave it alone, ReturnOf4Eva is definitely worth
listening to, and I'm pretty sure you will come away with at least one song that you can
relate to.


TAGS:  big k.r.i.t., raheem devaughn
Previous: Ladi6 Does It Live For The Red Bull Music Academy Next: We ‘Wonder’ If You’ll Love This C.9ine & João Orecchia Collaboration As Much As We Do