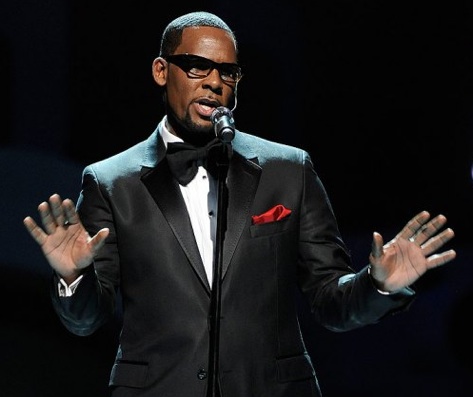 If you've got a jones for R. Kelly, then BET's Centric is the place for you to be this weekend. The network, television home to the Soul Train Awards and some of BET's better program choices, will feature the "When A Woman Loves" singer in an entire day's worth of programming in an effort to reintroduce the singer to pissed off fans celebrate his 20-plus year career.
Center

Taking place this Saturday, May 14th, the weekend will kickoff with special edition of Retro Centric and Centric Hits featuring nothing but music by Kelly or artists that he's produced. This will then be followed by a re-airing of this year's Soul Train Awards, which featured the now-iconic performance of his hit "When A Woman Loves." The day will also feature a special from the singer's "Light It Up" Tour and a special countdown hosted by Kelly from his Chocolate Factory Studios.

The gem of the event will be the broadcast of the never-before-seen R. Kelly Sings Sam Cooke - Live from Five Star special in which the singer channels the late-great soul singer.

And if you happen to miss all the shows on Saturday, don't fret. The network plans to re-air all the programming on Sunday, May 15th. So set your DVRs and enjoy the show, folks.