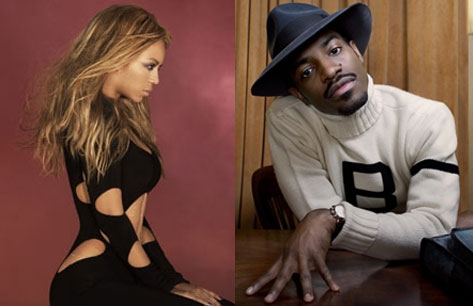 Ever since the tracklist for Beyoncé's 4 surfaced, I've been most looking forward to one track in particular, and now it's leaked. "Party" is produced by none other than Kanye West himself and features hip-hop disappearing act Andre 3000 (seriously, when are we gonna get a new track from him that's not a feature). Borrowing a bit of Slick Rick's "La Di Da Di," the track sounds like a throwback to the mid-'90's, when music was made to bump in your Jeep and a good groove could get a party going. Bey also seems much more relaxed here. It doesn't feel like she's trying to blow you away with her voice, but like she's simply singing for enjoyment as she talks about being "so in love." Dre drops in toward the end with a rap that's suprisingly filled with a few expletives (between the "I think I need a barber..." line in "Run the World (Girls)" and this, I guess King B simply gave up trying to be squeaky clean). It's a satisfactory verse from 3000, but not on the level of some the features we've gotten from him on other tracks. All in all, and minus Ye's "swagu" line (really, Kanye?), this track is very good look from Ms. Knowles.
Center