Jill Scott Takes Us On A Journey To The ‘Sun’ 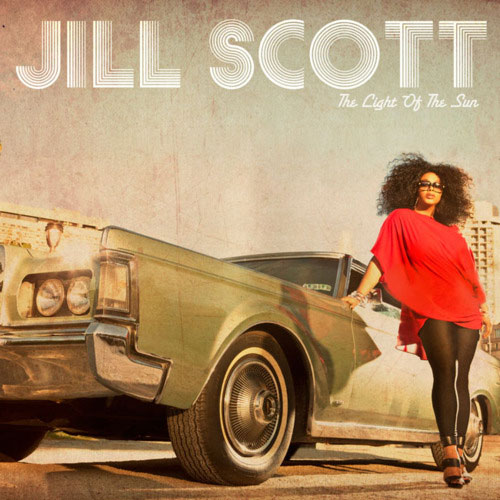 A new Jill Scott album is like a visit from your favorite cousin that you only see every once in a while. It's because her albums have such an intimate feel to them. The Light of the Sun takes this feeling even further, inviting you to not only enjoy in her triumphs but also her pains and disappointments.

Upon pressing play, you'll find that the album's title might be more reflective of a hope than a declaration of fact. You see, a lot of Sun finds a woman who has been hurt by love a few times too many and is wondering how to move forward. Sure, there's the joyful tone of opener "Blessed" where Jill pontificates on just what makes her life worthwhile with a smile on her face. There's also the sublime "So In Love," a warm slice of soul where Jill's creamy alto meets Anthony Hamilton's gravelly tenor to talk about the joy that love can be. But these are more the calm before the storm.

Consider the sassy funk of lead single "Shame" to be the sound of thunder in the distance. Here, she's become brassy and brazen, telling the man that could've been what he could've had while guests Eve and The A Group let him know that he truly missed out on a good thing. Doug E. Fresh then assists to let him know that she's "All Cried Out." Doug E. brings the old-school hip-hop flavor as Jill brings sweet simple vocals and calls her misguided lover to task.

"Le BOOM Vent Suite" is the album's turning point. The first half is a fiery dismissal. He missed out and she's over it like BOOM. This soon gives way to the rain and a more vulnerable Jill who has realized she just might need him after all. Like Erykah Badu before her, Jill uses this suite to show that there are many stages to the end of a relationship. The following song "So Gone (What My Mind Says)" is her inevitable relapse. Both a sultry slow jam and lament at once, it's a great groove that even out-of-left-field guest Paul Wall (and his "diamond chip d--k") can't derail.

This leads to the first track anyone ever heard from Sun, the soul-searing and pain-filled "Hear My Call." Jill sends up an honest and heart-filled prayer for healing after being once again burned by love and left hurt in the wake trying to cope. Jill has a reputation for being honest and frank in her music and performances, but this is perhaps the realest that she's ever been. You feel her and feel for her as she calls on God to help ease the pain she's feeling.

The next few tracks find Jill getting on and off the love train. "Some Other Time" focuses on the trepidation a woman feels when discovering a new love, while "Quick" is about an affair that lasted shorter than expected (and puts her son's father out on Front Street). "Making You Wait," "Until Then (I Imagine)," and "Missing You" serve as the slow jam section of this set. Each has that after-midnight flavor to them that Jill always brings, though none reach the body-rocking level of The Real Thing's "Crown Royal." One of the reasons why is that each still has the residue of pain from the previous tracks and seem to be rooted in something a bit deeper than just carnal desire.

The first sign that the storm might just be over is the Marvin Gaye-esque "When I Wake Up." Yes, like "Hear My Call," she's still talking about the pain and confused state that she's been left in, but she's a glimmer of hope. She now knows that when she awakes from what seems like a bad dream, everything "will be beautiful" once again. The sun finally starts to shine again as "Womanifesto" continues on this theme, with Jill claiming her own power and womanhood ("I am a motherf--king, G" she says matter of factly) that then flows into final track "Rolling Hills." When she speaks on the power in a woman's body and mind, you sense that she's not only talking to all women out there, but herself as well.

The Light of the Sun is perhaps one of the most honest and heartfelt albums to be heard this year outside of Adele's 21. Not only does it deliver, but it feels much more focused and intimate than its' predecessor The Real Thing. I've heard some rumblings that lead single "Shame" turned some people off to the project (I don't know how. It's a great song). If they decide to miss out on this one because of that, it'll be a real shame indeed.

Jill Scott The Light of the Sun
[Amazon][iTunes]