Kindred The Family Soul’s ‘Love Has No Recession’ 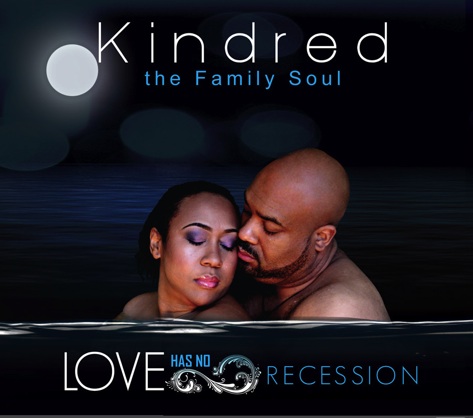 There is just something special about Kindred the Family Soul. Sure we get to hear numerous love song duets from some of our favorite soul artists but the fact that these two are actually in love, and not just pretending, adds a little something extra to their music. On Love Has No Recession, the duo's fourth album, their tried-and-tested formula takes a bit of a different route, still dealing with love in all its' infinite glory, but also dealing with more social and political themes -- apt given the times we find ourselves in.
Center

The album opens with an immensely funky instrumental and then we are thrown in at the deep end, so to speak, on the Ursula Rucker assisted "Above Water Part 1," the first of three "Above Water" interludes that deal with the financial difficulties we are all currently facing. Rucker's powerful delivery combined with Fatin's husky growl sets the scene perfectly and acts a great introduction to "We All Will Know," which features Raheem DeVaughn in fine, if fleeting, form. Opening with the refrain "It's spiralling outta control, what's gonna happen when the cops aint been paid and they're forced to patrol and every man for himself got a gun, so God bless our souls," the track goes on to detail the difficulties faced by society when the money is running low. While it may all sound a little depressing there is a real sense of hopefulness in their delivery.

"Take A Look Around," with guest appearances by BJ the Chicago Kid and Bilal, follows a similar theme and is reminiscent of the socio-political musical landscape of the '70s. You can almost picture Marvin Gaye singing this exact track. "You Got Love" is a nice mid-tempo groove, and Snoop's speak-rapping
isn't as intrusive as I had imagined it would be. Similar to its'
predecessor, the official first single "Magic Happen" is a return to
Kindred's trademark love songs, one that is perfectly executed and
actually makes you feel slightly voyeuristic (in a non-creepy way). It's
as if you are intruding on the private thoughts of Fatin and Aja, which is a testament to both their songwriting and the obvious love they share.


It seems that no soul album is complete nowadays without a direct Motown tribute and Love Has No Recession has no intention of bucking that trend. WIth Lady Alma
on board, "Authentically You" includes the obligatory hand-claps and
catchy-as-hell chorus but this is no Motown-by-numbers rehash. In fact,
"Authentically You" is one of the standout tracks from the album, and is
set to become my new personal anthem. With "Above Water Part 2"
providing a much needed breather, we get onto what is possibly the
high point of the album, "SOS (Sense Of Security)." Getting back to
basics, the track sees Kindred, minus any guest appearances, exploring
the insecurities that I'm sure anyone who has ever been in love can
relate to. They sing, "Are we still good? Do you still feel the same way about me?
Oh, I don't want to feel a false sense of security." Seemingly plucked
from the classic era of soul music, the song and lyrics have universal
appeal and showcase the duo's undeniable ability for writing top-class
songs.

The remainder of the album continues with their effortless combination
of love and social commentary, which, even after 16 tracks (including the
intro/outro and a bonus remix of "You Got Love"), never gets tiring. In
an age where everyone seems to be dropping nine or ten song albums, it's
great to see that there are still artists who can hold our attention for
longer than 35 minutes. With Love Has No Recession Kindred have
managed to craft an album that is simultaneously timeless and of the
moment, an accomplishment that is certainly no mean feat.