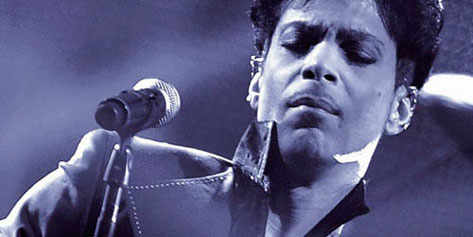 That Prince Rogers Nelson didn't debut on this earth from inside a puff of purple smoke, with a laser light show and parade announcing his arrival was news to me. The fact that the man wasn't born drenched in awesome, drawing envious stares from other babies in the nursery is also a new discovery. I'd simply assumed that he has always been awesomely fantastic. I'd never given thought to the time period before Prince was PRINCE.
Center

But every so-called gifted artist has a journey to brilliance. In his
case, Prince's was marked by rocky relationships with his parents, an
awkward adolescence, and numerous poorly received bold musical
declarations before striking creative gold several albums in. I can
admit that I am not exactly a Prince historian. I can't name all
of his albums. I don't know his first number one, the story of The Time,
nor every member of his
first band, Grand Central. The mystique and air of large-scale
eccentricity surrounding the man
in recent years combined with the fact that I wasn't old enough to
fully
enjoy his biggest hits in real time with older Purple One enthusiasts,
all resulted in a genuine
but shallow admiration for his body of work. Sure, he's great, but in my
time, his quirks and oddities have seen more press than his
groundbreaking musical endeavors.


The man's road to greatness is thoroughly documented by Jason Draper in Prince: Chaos, Disorder, and Revolution (Backbeat Books, 2011).
Clocking in at under 300 pages, the biography lays out the life of the
often reclusive pop and funk giant. Draper takes a decidedly
straightforward look into the numerous failures, ego-driven chaos, and
well-intentioned drama that plagued his early years and leads readers
through to later works like 20Ten. It recounts his many loves and
losses, his insecurities and his triumphs. Obviously coming from a
place of praise and respect, the writing style is unwaveringly
journalistic. None of the flowery creative acrobats found in celebrity
memoirs appear here. Yes, Draper obviously knows his subject -- this is
his second Prince book -- but
without any new, earth-shattering revelations how many different ways
can this story be told? The only new interviews were with people like Dez Dickerson of The Revolution and Rosie Gaines of The New Power Generation, and not Prince, himself. How many different spins can one writer put on this tale?

For
myself, the admittedly casual fan, the tale gripped my interest from
the onset. To see the makings of a genius and the numerous stumbles
before he soared was endearing. For the diehard fan who has devoured
every interview, profile, and piece of concert footage I don't suspect
any new ground is covered here. Did I learn alot? Absolutely. Newer
(younger) fans will find great value in this book. It holds no punches
when detailing his vicious battle against Warner,
the label that discovered him and helped make him a household name. It
humanizes the ageless, smooth-skinned, panty-moistening petite unicorn
that our older sisters fantasize(d) about. It goes beyond the at once
shy and powerful performer, introducing new generations to the man, not
the myth.