What The Game’s Been Missing: Wardrobe 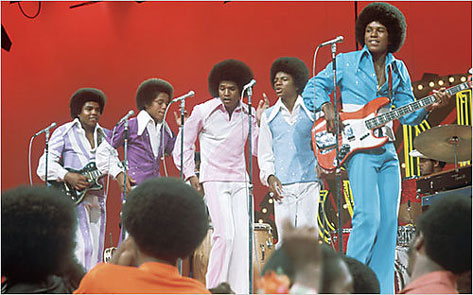 The best part of Soul Train wasn't Don Cornelius' deep, gravelly voice or often deadpan delivery. Nor was it the funky music that rocked
the bodies of the black and brown folks that showed up every week to get their collective groove on.
And while the dancing was indeed filled with funk, it wasn't that either. If you look at any Soul Train
episode, you will find young, spindly black folks doing wild dance moves or performing on stage clad in garments that by all
other accounts defy understanding. These clothes were quite literally out of sight -- that's really the only way to
describe them -- and the wardrobe choices captivated the audience weekly, inspiring ideas on how fashion and music could converge to make something new and exciting.
Center


Surprisingly, there are only a few artists today that have really capitalized on experimental
wardrobology. These freer spirits are typically regarded with scorn and quizzical looks of WTF and GTFOH, but
these performers (they ain't all musicians) have surely laughed themselves to the bank, crazy clothes
and all.

With that being said, here are a few current artists who have channeled the creativity of their
musical forebears in the wardrobe department and made cutting-edge style choices.

Earlier this year when Cee-Lo Green stepped his thick self out on the stage during the GRAMMYs looking like a juicy
piece of poultry, he did two things. Overtly, he just sang his hugely popular hit to millions of viewers.
Subliminally, he told the entire audience to f--k off with their preconceived notions of what creativity
looks like for a grown-ass black man with a decent rap career under his plumage belt.

Erykah Badu wouldn't be where she is today if she didn't get risky and wrap her head in her
grandmother's sheets. She also invoked the spirits of the African gods to imbue her music with its witchy
goodness, but that's another story. Remember LaBelle's strange shoulder pads and futuristic wigs?
Well, Ms. Badu co-opted all of it for her style in her later career, and these influences can be seen in her New Amerkyah Part 2 artwork.

Everyone knows the Badu booty had a hypnotic effect on Three Stacks' music, and this sea-change was
never more apparent than in his apparel once they headed for splitsville. The brother was walking out the
house in ponchos, furry boots, and all other manners of strange attire, then turned around and got all Rat Pack
for the "Hey Ya" video.

Before she went goth, Rihanna was a fairly attractive island girl with a voice that sounds like the bleats
of a baby billy goat. However, after she underwent her makeover from the dark side, she has been
channeling The Purple One and the Supreme Diva. Known for androgyny, ass-less chaps, and squeals
of delight, Prince shares Rihanna's haunting beauty and penchant for kinky clothing and content. And like Diana Ross, Ri-Ri is able to get away with questionable talent because of her perceived beauty
and connections in the industry. Although it's a Faustian tradeoff (beauty and popularity in exchange
for actual vocal skills), Rihanna is definitely making out like a red-headed bandit as a result of her
willingness to gyrate on the edge of fashion and music.

From George Clinton, to Michael Jackson, to Aaliyah, to Janelle Monáe, clothes have literally set artists apart and launched their
careers into a completely different orbit. Think about it. All the funky folks in music who are worth a
damn are willing to experiment with more than just music. It's clear that a lot of performers barely have
a sense of self before they are molded by their management team, and usually their personality is so
boring that they barely even get noticed. So maybe these artists need to take heed to this sage advice
-- A&R reps, listen up: Tap into funkiest, nastiest, darkest recesses of your artist selves and bring it forth
for all to hear and see. If artists are able to do that, then maybe they might have something worth listening to -- and watching.