Gods’illa Resuscitates The Game With ‘CPR’ 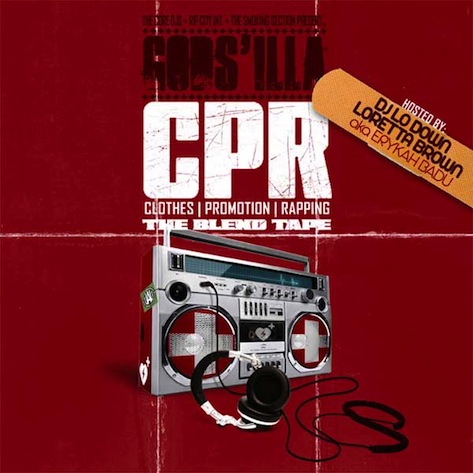 DMV-based rap group Gods'illa is ready to wreck the rap game with their new release, CPR: The Blend Tape.
Brothers Acem Eternal Mind, God Allah Truth, and Powerful Rasheem Mathematics partnered with
The Smoking Section to distribute their mixtape, and it is hosted by none other than high priestess
of dopeness herself, Erykah Badu aka DJ Lo Down Loretta Brown. Not bad for a group on their independent grind.
Center


Set against the backdrop of looped up soul samples, Gods'illa is what hip-hop heads would call "real"
(no flashy jewelry, no coonin' and buffoonin'). Standout tracks include "You Don't Have to Be a Star,"
featuring the breathy vocals of Maimouna Youssef, which complements the "Bonita Applebum"-esque
nature of the rap lyrics - a certified summer jam. "Glaciers II" featuring Joe D. is simply arresting; a
broken record and funky guitar lick never sounded so good. Riding the hypnotic flow of the beat, the
brothers were able to create a mesmerizing effect for the listener. "Light the Way" was also enjoyable,
with DC native Kokayi lending his high-level energy to the song.

Honestly I found Badu's interjections to be a bit distracting. Not because they were bad, but because
they were actually quite interesting. So interesting, in fact, that I kept expecting her to start singing
or perform a spoken word piece. That should be chalked up more to my conditioning as a Souldier in
Badu's Army than anything Gods'illa can control, because every listener brings a certain degree of bias
to anything they listen to.

This compilation is a strong showing for Gods'illa. The brothers' delivery, subject matter, and beats are
definitely worth checking out. Just know that at a whopping 21 tracks, this joint will take you a while to
get through, but the time spent is entirely worth it.