Whenever I hear that songs from my big list of My Favorite Songs of All Time have been covered, I always meet such remakes with trepidation and a mean side-eye. It's the rare singer who can take one of those songs from that list and do a decent job much less a damn good one. Thankfully Mara Hruby is one of the precious few whose renditions of others' tracks do the originals justice while she puts her own sweet spin on them. Because when she dared to touch Jamiroquai's "Alright" -- one of the selections on the aforementioned big list -- on her debut EP, I was all set to dislike it. However, her mid-tempo take on Jay Kay and crew's dance floor-filling groove won me over when she softly purred her way through the cut. In an effort to make sure that we don't forget about that song or the EP, Mara has released this video of her accompanied by only Nate Mercereau on guitar in the same studio where it was recorded for her project. I do like her studio version better than this acoustic rendering, but both are "Alright" with me. 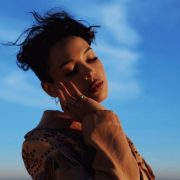 Get Closer To Sidibe With ‘Unreachable’