Turntable.fm is the latest online phenomenon to capture the attention of music enthusiasts on the web, and for good reason -- it's addictive as all hell. Currently in beta, the draw of Turntable.fm is the ability for people to enter rooms and release their inner Kid Capri on the turntables or simply be a listener and enjoy what is being played by the selectors. It's captured the attention of many artists such as Questlove and Brian Culbertson and even a certain Editor-in-Chief of a certain music blog.
Center

Yes, exactly one week ago today I became truly, madly, and hopelessly addicted to Turntable.fm. Encouraged by writer and friend of SoulBounce Q. Salazar to create a dedicated room for SoulBounce on there, I logged on to the site and within minutes what's come to be known as the SoulBounce Hang Suite was born, serving as the official Turntable.fm room for this site. And we've been hanging tough in the room playing soul music in all its various forms non-stop since its creation. Yes, non-stop as in 24 hours, 7 days a week. It's that serious.

Imagine, if you will, a party with one turntable and five DJs taking turns playing the dopest music, each DJ trying to outdo the other and get the party rocking the most. In a way, that's kinda like what happens on Turntable.fm. In each room there is a stage with five sets of turntables. When visitors enter a room, they have the option of simply being in the audience or jumping on stage to DJ if there is an open turntable. DJs take turns playing one song at a time out of their queue of music that they've either uploaded directly to or found in the Turntable.fm library. A DJ chooses what to play based on various factors such as their personal whims, the vibe of the room, or if there is a theme or genre being explored at a certain time. The audience of listeners can then vote to either skip a song that is played or rock out to it by either pressing "Lame" or "Awesome" on the meter at the bottom of the screen. The more "Awesome" votes a song gets the better, because DJs get points that can be redeemed to upgrade their avatars (which leave a lot to be desired and need a healthy dose of diversity) and listeners can make their avatars' heads bob to the song. However, the more "Lame" votes a song gets the higher the likelihood of that song getting skipped and then it's on to the next DJ. Anyone in a room can add a song that's playing to their own queue, purchase the MP3 on Amazon or iTunes, or pull it up on Last.fm, Spotify, or Rdio.

What takes Turntable.fm rooms to the next level is the chat feature located in the bottom right corner of the screen. It sets the social music and group listening experience off to be able to chat about the music being played, news and current events, or whatever under the sun with other people in the room. If you're in the right room with active participants, being able to interact with friends and/or strangers who are all music heads is the greatest thing.

This may all sound strange, but it's really not that complicated. Turntable.fm also has a very explicit FAQ section that spells everything out in great detail. Since the site is still in beta, it's only accessible to those who have a Facebook account and who already have a Facebook friend signed up to Turntable.fm as well as people whose names are being collected on an invite list. Access is also currently restricted to the US only. Turntable.fm is still in its early days and the RIAA and powers that be have yet to take the fun out of it.

As far as the SoulBounce room on Turntable.fm is concerned, it has been nothing but fun, fun, fun to quote Con Funk Shun. Those soul music lovers who've visited have called it their favorite room on Turntable.fm, and we already have a robust group of regulars who keep coming back to listen, DJ, chat, cut up, and chill. Feel free to join us, but you might not want to leave. Don't say I didn't warn you. 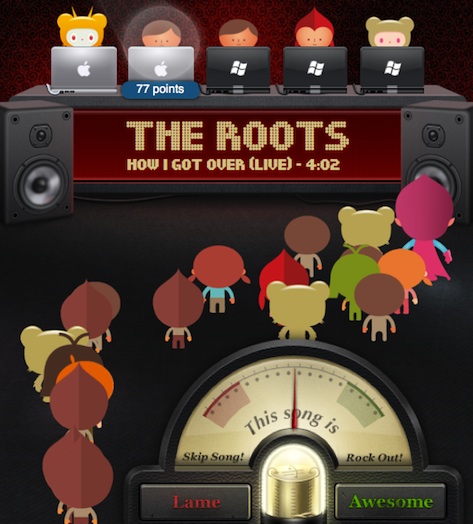