Take A Trip To Lenny Kravitz’s ‘Black And White America’ 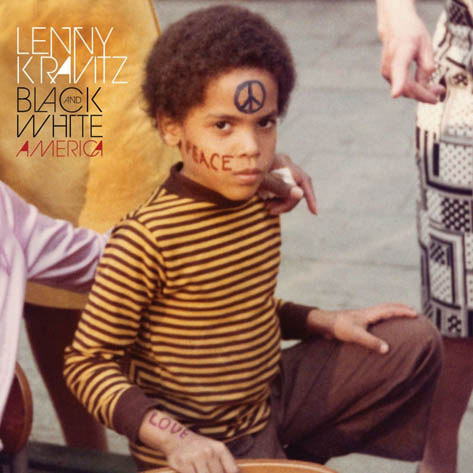 Lenny Kravitz is not an album artist. Then again, he isn't a consistently strong singles
artist either. He is a talented songwriter, though prone to cheesy, overly precious
lyrics. And if the critics are to be believed, he's neither R&B nor Rock
'n' Roll. He's an enigma, wrapped in a riddle.

For this reason, the prospect of a new Kravitz album has become less exciting with
each release since 5 -- in my opinion, his tightest, most consistently
enjoyable to date. After the unlistenable (but commercially successful) It
Is Time For A Love Revolution
, the jury was out on whether he should call
it a day and focus on acting. Then he discovered YouTube.

One of the savviest major-label artists on the network, Kravitz has become a quietly
formidable presence there, posting everything from slice-of-life vignettes shot
by French artist Matthieu Bitton to footage of studio sessions. With these
clips (the most popular being previews of upcoming tracks) he began
drumming up anticipation for his next album, Black and White America.

But don't look to this LP for incisive commentary on race in America today. Aside from the title track, a melodically pleasing ditty on which Kravitz tries to dissect racial issues with a butter knife, the album sticks to standard Kravitz subject matter: love, women, and Oprah-esque platitudes about being your best self.

It also hews close to Kravitz album formula from a musical perspective, with staples
like the Big, Badass Guitar Number ("Come On Get It"), the Funk Workout ("Life Ain't Ever Been Better Than It Is Now"), and the Two-Ton Feather ("Liquid Jesus") executed brilliantly for the umpteenth time.

But the real winners have to be "Superlove" and "Sunflower." The former, first teased on YouTube in the winter of '09, is a hypnotic bass/acoustic guitar tag-team, with welcome assists via synth and electric guitar. The latter sees Kravitz teaming up with his brother in unabashed emotion (and yes, Black and White Judaism) on what has to be the single most effortlessly modern-sounding performance of his career. Drake acquits himself well enough, but the inexplicable recycling of the drum pattern of Love Revolution's "Will You Marry Me" is something Kravitz (or co-producer Swizz Beatz) really needs to explain.

And speaking of unabashed emotion, let's get to the bleeding-heart elephant in the
room: Ballads. Lenny loves his ballads, and he loves 'em big and goopy. Thankfully, he was largely able to rein in those impulses, allowing for only one real atrocity -- the truly excruciating "Dream." (Sample lyrics: "You can take away my freedom / But my spirit will run free / You can take away my vision / That don't mean that I can't see.")

All in all, it's a satisfying listen. Sure, he isn't reinventing the wheel, but he does
stray from the formula every so often. The production on "Sunflower" and the bonus track "War" subtly reference '80s-era Michael Jackson, while the Jay-Z-assisted "Boongie Drop" is easily the most unLennylike record you'll ever hear. (And not in a good way.) But even as you play Lenny Bingo, marking off the familiar styles he dusts off over the course of the album, you'll find yourself weighing the 2011 editions pretty favorably
against their progenitors. That's reason enough to ditch the scorecard and
enjoy the album for what it is.


TAGS:  drake, jay-z, lenny kravitz, Matthieu Bitton, michael jackson, swizz beatz
Previous: Sharlene Hector Has Been ‘Up All Night’ Next: 4 Other Ways Beyoncé Could Have Announced Her Pregnancy