When writing about Frank Ocean's "Dying for Your Love," I mentioned how much I dug Frank's top-notch songwriting skills. Though some folks my have thought my claim was dubious, I stand by it. Someone else who feels the way I do is UK singer/songwriter Ed Sheeran. Appearing on BBC 1Xtra, Sheeran performed a cover of Frank's "Swim Good," a gem of a song from Mr. Ocean's Nostalgia, ULTRA mixtape. I think Ed Sheeran's cover of "Swim Good" really highlights the skill of lyricism that Frank possesses. Here, he decides to strip down the original's more crowded production and opt for only an acoustic guitar as accompaniment, allowing for the contemplative and heart-heavy lyrics to really have an impact. If you're liking Ed Sheeran's spin, our friends at Mixtape Maestro have ripped the performance audio for your downloading pleasure. Also, be sure to check out Ed's latest album + on iTunes. 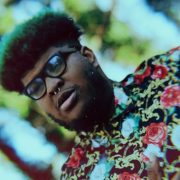