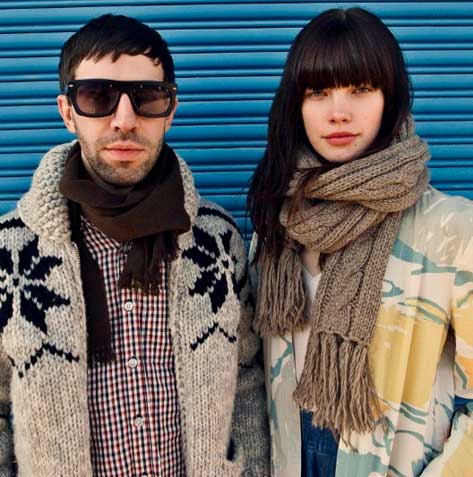 Hailing from Canada and calling NYC home, husband and wife duo New Look are on the verge of blowing the roof off of this sucker. With a sound that is reminiscent of Little Dragon meets Quadron if this were 1983 and Reggie Lucas and Jellybean Benitez were behind the boards, singer Sarah Ruba's sweeter than agave nectar vocals prance on top of Adam Pavao's synthesized soundscapes. They're '80's babies (she's 25, he's 31), and the decade's influence is clear in their music, which has across the board appeal with its electro soul leanings -- causing old heads to uprock and hipsters to possibly dance on beat. They released their self-titled debut album this week, but they've been bubbling under the surface for a few years now -- they released an EP, How's My Hair? in 2008. Other than sharing stages with Theophilus London and possessing another hard-to-Google name (i.e., The Internet and Friends), their music has been called "future pop" (another day, another new genre) but that undermines the soul and even funk inherent therein. Take songs such as their combination remake of "He Doesn't Know That I'm Alive"/ode to Janet Jackson, "Janet," and "So Real," first released on their early EP and included on New Look, for example. These are two stone cold jams and a representative sample of the more soulful fare that they are capable of. The best look would be to not classify New Look at all and just enjoy all the flavors that they are bringing to the musical table.
Center


TAGS:  "Reggie Lucas, Adam Pavao", audio, janet jackson, Jellybean Benitez, little dragon, new look", quadron, Sarah Ruba, theophilus london
Previous: Gettin’ Down With The ‘Kings,’ As Crowned By Borbay Next: Jessie Ware Has Us ‘Feeling’ That She Has A Bright Future Ahead