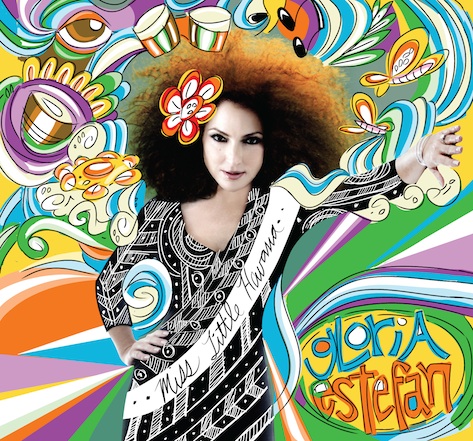 Gloria Estefan's Miss Little Havana is a fun, sweet-but-street album that I challenge anybody not to get up and dance to. One thing I've always respected Gloria for is how she embraces all of Cuban music, specifically the African components. I'll never forget on the liner notes of her first Spanish-language album, Mi Tierra, how many times she stressed that this was Afro-Cuban music. So it should be no surprise that she used Pharrell Williams to produce the first nine tracks on MLH. However, this is not a "Neptunes featuring Gloria Estefan" album. Pharrell really stays true to the genre and the results are que bueno.
Center

I would separate this record into two distinct parts: the tracks Pharrell produced and the tracks Pharrell didn't produce. The former bring you into the groove, keep you there, and make you never want to leave. The instrumentation is used wisely and never overdone in any one place. And the beat and bass are bangin. The non-Pharell tracks are kind of, well, all over the place.

The album opens with the Latin freestyle-flavored title track, "Little Miss Havana." (If you aren't familiar with freestyle music, check out George Lamonde or TKA.) The beat really swings, and is punctuated with just enough bells and horns to start the party. Gloria tells us all we need to know about the album's theme when she sings that Miss Little Havana is "17 with a body just like a model/I heard that she was in that superstar cabana/dancing as if she just hit the lotto." It sets the tone for the (loosely-based) theme of the album -- a cautionary tale for the Miss Little Havana's of the world trying to live too fast.

"I Can't Believe" picks up right where the title track leaves off, lyrically and musically. Pharrell leaves this one lean and mean, using only congas, cowbells, timbales, and a mixed-down piano for Gloria's voice to ride. He only brings the trombones and trumpets in for the bridge. This one has a mid-tempo salsa beat, and reminded me of a lighter version of Tony Touch's "Dimelo."

By the time we get to the salsa-funky "Heat," the party is full swing. Here, I love how Gloria's staccato phrasing on the hook makes each word a part of the rhythm "As-you're-dan-cing-you-look-down-and-sa-vor-your-bo-dy" rolls off like it's played on the congas. What sounds like an accordion provides the bass line, and hand claps blanket the conga and timbale rhythm. Here, as in several tracks, the lyrics are in Spanish and English, with Gloria paying homage to Buena Vista Social Club's classic "Candela" when she sings "Come on Candela/tonight you're sueño"

The first single off Miss Little Havana is entitled "Wepa." Let me warn you right now: I clocked this cut at 140 beats per minute. It is merengue with a double Café Cubano, so pace yourself dancing to it. You'll get caught up chanting the festive chorus "Hey hey hey hey! Wepa! Wepa!" and think you can hang. Have your oxygen nearby, though, because you'll be doubled over trying to catch your breath by the second verse. This is arguably the most street of all the tracks, with the shakers, trombone blasts, electronic drums, and rasta dub synth riffs. You could easily imagine a crowd on Ocean Drive in South Beach having a spontaneous merengue party to this song. Thankfully, you get time to catch your breath when the album downshifts to two smooth sambas: "Say Ay" and "So Good." "Say Ay" adds to the passion by trading lyrics in Spanish and English over its throbbing bass line. "So Good" is done in a more rustic style, blending acoustic guitars, shakers, and rim shots into a stripped down rhythm and dialing up the bass trombones.

After track nine, MLH uses several different producers. I'm not saying this is a bad thing, nor am I saying the latter tracks are bad because they aren't. What happens, though, is the album loses its originality by applying the current David Guetta/Dr. Luke techno sound and forgetting the tradition from the first half.

With "Hotel Nacional," I love how the producer Motiff reinterprets the big-band sound loops that were used in house music in the late '80s. Had I not heard the first few songs, I would feel differently, but to go from such a fine assembly of Afro-Cuban music on the same album to this is too big a step off the curb. We hear what sounds like a techno merengue with the song "On," but it feels forced. The lyrics are really bad. For example, the chorus is "You turn me On on on on/On on on on" and the melody is similarly one dimensional, literally one note on the synth. The guitar solo just doesn't fit with this song.

"Make Me Go" starts out sounding like something that would've been on Gloria's Oye album. She takes her time unfolding the vocals, while the beat forges ahead. Then they change the whole flow for the chorus, using some of the rustic rhythms and trombones from "Say Ay" but at a sped-up ranchero tempo.

Despite the album's latter tracks not being as strong as those that kick off the record, Miss Little Havana deserves a spot your music library. It is a fun and flirty non-stop dance party and one of the most surprising albums of the year. Press play and be transported to South Beach. Wepa! (Now where's my oxygen tank?)