Is It Time To Occupy Record Labels? 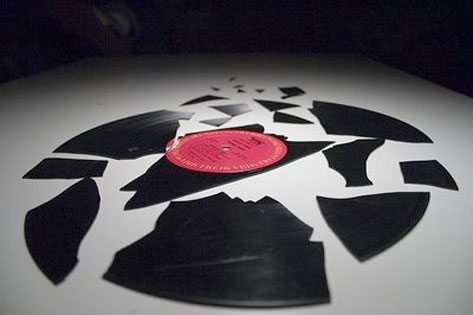 You remember when Q-Tip told us on all about, "Industry Rule #4080: Record company
people are shady"? The classic line from the 1991 A Tribe Called Quest single "Check the
Rhime" was one of the first records to warn aspiring rappers to watch themselves in the ruthless
music business. But, of course, nobody listened. Years later on his 2004 album, The New Danger, Mos
Def
's "The Rape Over" gave a raunchy yet poignant insight into the corporate takeover of
music. But still, like that naïve white girl in a horror movie going down stairs to check out that
strange noise, we didn't listen.
Center


Even before hip-hop's surge and rise to prominence in the music industry, Chess Records and Motown had their way
of dealing with artists in the '50s, '60s, and '70s. The dynamics of the
business are pretty much common knowledge, but if you know better, you do better...right?

Folks -- many musicians included -- are joining the Occupy Wall Street movement across the nation, taking a stance against corporate
greed, so I figured, why aren't recording artists doing the same against the corporate greed of their very own labels? Is it a case of not wanting to bite the hand that feeds them? Even though in the vast majority of cases, artists are being fed table scraps while those in positions of power at record labels rub their bellies all the way to the bank.

Don't get me wrong, I'm not playing spokesman for millionaire artists like Beyoncé or Kanye West (who has thrown his support behind the Occupy Wall Street movement), even though many of
them probably grew up in middle class families. What I do understand is the power of their celebrity and commercial success. Call me crazy, but
what if they created a united front and leveraged their star power into a union for all recording artists? I mean we saw the
NFL battle it out over the summer while the NBA lock-out is still on-going. No, I'm not a far left
leaning liberal, but I think bargaining agreements are imperative for any industry.

This type of practice would allow independent artists and labels to have equal footing when
negotiating. Of course, this would be for artists who choose to sign with major labels.

In 2003, after their contract with EMI ended, alternative rock band Radiohead reportedly turned
down multimillion dollar offers to sign with other labels. Instead they remained independent and
shocked the industry in 2007 when they released their seventh studio album, In Rainbows, online
and urged fans to pay whatever amount of money they thought the album was worth.

Going indie is no new phenomenon; generations of artists including James Brown, Prince, and
Public Enemy have all released independent projects. Creative control is an essential freedom
some artists surrender when they sign to major labels. In exchange, they get peanuts, while the
labels bask in the major profits. Well, I think it's time for artists to get their fair share, don't you?