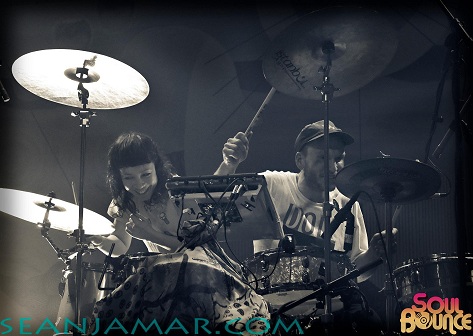 If you were to mention the name Little Dragon to most people, a resounding "Who?" may be their response. However, you wouldn't have known that by the sold-out crowd at New York's Terminal 5 this past Friday. A sea of people, all races, sexes, sizes, and shapes represented, filled the venue to get a glimpse of Yukimi and crew doing the magic that only they know how to do.
Center 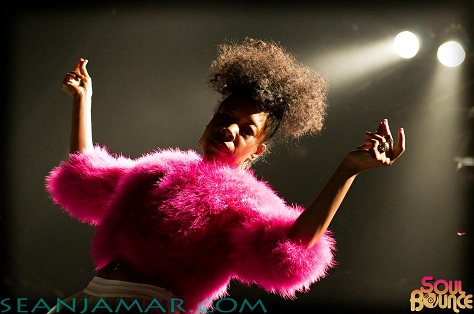 But before Little Dragon took stage, the crowd was taken care of by a few opening acts. DJ Questlove, who served as the evening's host of sorts, played a short, but definitely sweet set featuring J Dilla, Erykah Badu, A Tribe Called Quest, and more. Then he introduced the evening's first act, who just happened to be his sister Donn T. Making her New York performance debut, she came on stage wearing white, flowy pants and a midriff-baring hot pink poof of feathers as a top. She immediately launched into her first song "Hey DJ," and she controlled the crowd deftly, her infectious smile never leaving her face. Soon she was on to her next song "Happy" and she managed to keep the crowd interested with the uptempo number. Before it was over she brought two audience members up on stage to sing along, giving the rest of us a good laugh. Her third, and final, song of the night was "Wait," which she wrote for the film I Will Follow. It was a bluesy, rock-tinged number that tugged at your heartstrings and showed Donn's depth as a songwriter. After that Donn made her way off stage, but not before she gave big brother Quest a hug and kiss. 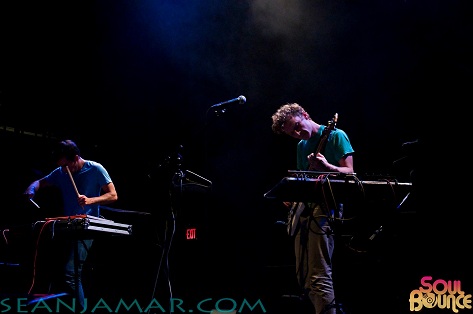 After another brief DJ set which included Michael Jackson and Kanye West, Quest introduced second act, Javelin. The band consists of two regular-looking white guys, a guitar, a sampler, and a drum machine, but they soon proved that appearances can be deceiving. With just those scant few instruments, they created an impressive wall of sound. Nothing seemed to escape their musical blender as they mashed up well known songs by everyone from Smokey Robinson and the Miracles to Mary J. Blige to The Beastie Boys, and Blondie and pretty much everything else in between to create their own songs and grooves. Overall, their sound mined the sound of '80's pop, R&B, and hip hop and melded it into something modern and completely new. 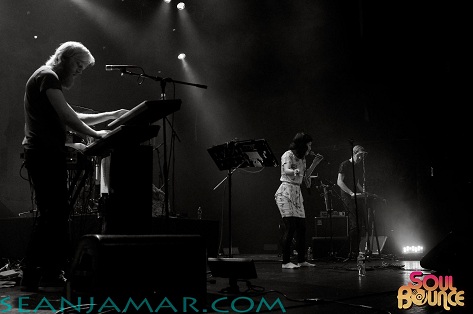 After a Prince-heavy DJ-set by Questo, a fog came rolling in on the stage followed by the boys of Little Dragon (Erik Bodin, Fredrik Källgren Wallin, and Håkan Wirenstrand). Soon Yukimi took the stage donning an outfit decorated by a print of wrenches and bolts as the first notes of "Looking Glass" filled the venue. Their latest album's title track "Ritual Union" was next as the stage was bathed in red light and Yukimi sang about the misgivings of marriage. A slower, moodier version of "Brush the Heat" followed, and LD stretched it out and expanded it to an almost 10-minute long groove that simmered and rose dynamically. By it's end, Yukimi's sparkly shoes had come off and the crowd was enthralled.

Showing no signs of stopping, the band performed "After The Rain" from their self-titled debut before embarking on a cavalcade of songs from Ritual Union that included "Shuffle A Dream," "Please Turn," "Crystalfilm," and "Summertearz." The performance almost seemed other-wordly as Yukimi kookily pranced about the stage and the guys buoyed her vocals with ethereal-sounding musical landscapes. "Feather" and "Precious" closed out their set to much ardor from the crowd. The fog had begun to clear and Questlove could be seen watching from the side of the stage as the band members exited. 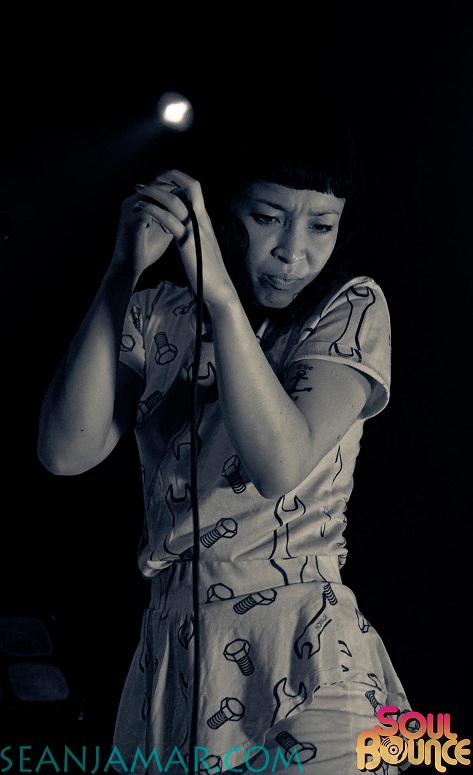 But just when you thought they were done, they came bounding back on stage for more tracks. The new-wave flavored "Little Man" led the encore and was a fun time as the boys played their hearts out and Yukimi shuffled about the stage. "Blinking Pigs" came after and was extra fun mainly because Yukimi joined Erik on the drum kit and they played to their heart's content. The quartet's final song was perhaps their best known, "Twice." It was just as haunting live as it sounds on record. As the piano played and the synth strings soared, Yukimi bid the crowd adieu and was soon followed by her fellow bandmates. The last vision the audience saw on the stage was Questlove grabbing his bag and exiting right behind them.