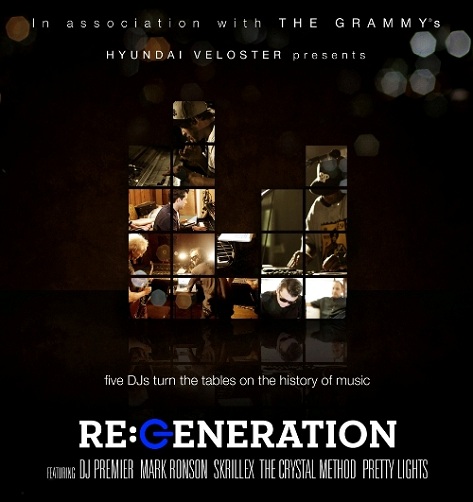 What do you do if you're a DJ tasked with reinterpreting jazz through your own lens? If you're Mark Ronson, you invite friends like Erykah Badu, Mos Def, Trombone Shorty, drummer Zigaboo Modeliste, and The Dap-Kings over to make a pot of musical gumbo New Orleans-style. As part of Hyundai Veloster and The GRAMMYs documentary project Re:GENERATION, Mark and crew got in the studio and did just that. The down-home and funky "A La Modeliste," which I can only assume is named after drummer Zigaboo, is a feel-good time. Erykah, continuing her fascination with women who shirk undergarments, sings about yo' mama and her interesting recipe for cooking gumbo (I'm really hoping this is all musical, as I don't think her methods would pass any board of sanitation's guidelines). Each player contributes their own spice and flair to the concoction (especially Shorty, who puts some extra stank on the horns), giving the jazz a slightly modern day feel. Re:GENERATION, which will also feature behind the scenes looks at collaborations/genre-bending featuring DJ Premier, Skrillex, Pretty Lights, The Crystal Method, and Nas taking on different genres, will premiere early next year. Until then, grab a spoon and get a taste of "A La Modeliste" after the bounce.
Center
After the bounce