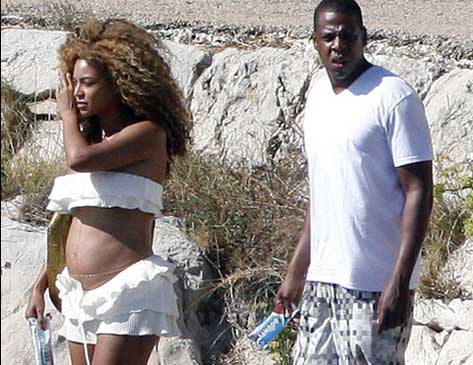 We live in a new day. No longer can celebrities (or you, for that matter) tip toe under the cover of darkness to commit misdeeds, or have shadow families, or have a drug problem, or be imperfect in any way. Way back when we gave artists the benefit of the doubt, but now it's harder to do with so much of our activities being captured by the technology we carry in our back pockets. Trust me when I say this: the internet ain't your friend.
Center

No longer are the paparazzi just taking pictures; they snatch up every last detail of celebrity dealings at the root, gleaning information that is ultimately provided by the artist via Twitter, Facebook, websites, and blogs. Without handlers to intercede on their behalf, artists are exposed to the world like little grammar lambs going to slaughter -- hey, Tyrese! -- and sometimes it's not a good look. Too much access to your favorite famous person is not such a good thing. We might just need to close the blinds from time to time and have a little privacy.

For a long time I was highly intrigued addicted to the juicy morsels of gossip that came spilling out of the tawdriest of blawgs (I won't name names, but it rhymes with "ossip"). It wasn't just because they offered up the dirt on my favorite celebs with the vigor of a rabid honey badger; nay, it was because they had plausible evidence to back it up. I'm talking pictures, screenshots, video, diagrams, and PowerPoint presentations on every A-Z list artist I was interested in. And through all of this investigating into the life of someone I don't know, I never really thought about how much it would suck to be in the public eye. It must be terrifying to be constantly judged about whether your personal trainer is "working you out," or what your real hair and edges look like after years of hiding in the lacefront protection program, or whether or not that white substance under your nose is cocaine or just ash in need of lotion. Celebrities are bound in the golden handcuffs of fame. But how do you hold the attention of the masses without constantly doling out information about yourself?

Some artists, of course, are better at keeping their privates private than others. Beyoncé and Jay-Z, for as much as people like to malign them, are good at holding back (pregnancy announcement notwithstanding); Rihanna, not so much. Phrases like, "my Twitter was hacked," "my phone was stolen," and "that freaky sex tape you saw with the dwarf dominatrix, that wasn't me. It was my twin cousin" have become normal. And part of this is our own fault. As I was informed by a new acquaintance I met at brunch, we are so desensitized to scandals because we share so much online. Eventually, this oversharing may show us how human our heroes are, and maybe that will cause us to be more forgiving. That's a pretty dope sentiment, but people will still find a reason to snoop.

So until we get to the point where we can accept the foibles of musicians and artists we glorify, I'm pretty sure someone out there will continue to gobble up the digital bits of their overexposed lives. This will lead musicians (and all of us, ultimately) to either let it all hang out or to hide it all under the burqah of discretion. Given the type of things that come across my Twitter timeline, I think some privacy every now and then might be best.