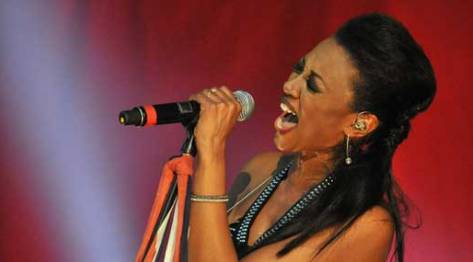 Beverley Knight's career has been a strange one. Often seen as too pop for the soul crowd but refusing to bow to current trends in order to appeal to the commercial masses, she finds herself in a weird kind of limbo, caught between the two audiences. However, it is testament to both her talent and tenacity, and the loyal fanbase that she has steadily built since her debut album The B-Funk, that she is still going strong 16 years later. Last week I was lucky enough to catch Beverley as she embarked on a UK tour to promote her seventh studio album, Soul UK, a collection of cover versions comprising songs by UK artists that have inspired her to make music. The album was always going to be a risk given that she would be covering the likes of Omar, George Michael, Jamiroquai, and underground favorite Lewis Taylor, but the studio versions at least were a success. Whether she would be able to deliver these classic songs live that would be the real test.
Center

Before Beverley took to the stage, we were treated to not one but two opening acts. First up were the Bounce-Worthy Australian trio Electric Empire, whose self-titled album has definitely been one of my highlights of 2011. The trio were accompanied on stage by another guitarist and received a warm welcome considering the venue was barely a quarter full. They kicked things off in a pretty restrained manner with the emotional "Brother," which segued into the wonderful "Life Again." It was clear that those in attendance were not familiar with these guys, but after Aaron's Stevie Wonder-like delivery there were murmurs of "who are they, and where do I get their album?" throughout the audience. The second half of their set upped the funk levels as they delivered the irresistible "Baby Your Lovin," the new single "Yes I Will," and a storming rendition of "Love Having You Around" that made even the most diehard wallflowers warm up a little. Their short but sweet six-track set was over way too quickly, and I would have happily just listened to these guys jam all evening. The way they play off one another is incredible, and it's great to see a band where all members share lead vocal duties as well as playing their respective instruments. A special mention must go to Jason on drums whose old school vocal and instrumental ad-libs, combined with some great facial expressions, made the performance.
Next up was Brit-soul legend Omar who I feel strange describing as an opening act, especially after seeing him in the headline slot on previous occasions. After the high-energy soul and funk of Electric Empire I was a little nervous as to how Omar's laid-back soul grooves would go down, especially as by this time the venue was getting full and the crowd was getting very loud. As Omar took to the stage with just his trusty keyboard in tow the few hardcore fans in the audience gave him a rousing round of applause but the majority, unfortunately, seemed content to carry on their conversations regardless. His all-too-brief set included "Sing," personal favorite "Little Boy," and, of course, "There's Nothing Like This," but it was almost impossible to hear his vocals over certain rowdy, disrespectful crowd members. The man himself even picked up on the vibe, assuring the audience not too worry and that Beverley would be on soon. After seeing him headline a packed out headline gig at London's Jazz Cafe, where the crowd hung on his every word, it was a real shame.
Finally Beverley hit the stage, bang on time at 9 pm. I have seen her perform live before, but there are two things I still cannot seem to get over, the fact that she appears genuinely bemused that all these people are here to see her perform, and the fact that she is so tiny -- I can't fathom where that voice comes from. After a brief chat and once again thanking everyone for coming out it was down to business, kicking things off with a medley of her earlier work including "Get Up!" "Made It Back," and "Flavour Of The Old School." These earlier songs showcase the funky, Prince-inspired songstress that a lot of the crowd first fell in love with, with audience members who were barely even born when these tunes were released singing along and working up a sweat on the dance floor. In fact, throughout the two-hour set/aerobic workout Beverley expertly balanced not just her older and newer work, but also the tempos, whipping people into dance floor frenzies one minute, then bringing things down a notch or two to let them recover.
The setlist was expansive and I was too engrossed to make any kind of effort to record the order in which any of the songs were performed in, but I'll run through most of it. Her renditions of Jamiroquai's "When You Gonna Learn" and the Young Disciples' "Apparently Nothing" were huge crowd pleasers, showcasing both the power and range of her vocals. On the latter, she was ably assisted by her backing singer Brian Chambers, a man who needs his own recording contract right this minute. Soul II Soul's "Fairplay" sounded infinitely better live than it does on the CD, and Heatwave's "Always & Forever" provided one of those much needed downtempo breaks and a chance to catch a breath. Trying to keep her whole fanbase happy she performed her three pop-crossover hits "Shoulda Woulda Coulda," "Keep This Fire Burning," and "Come As You Are," each infused with much more soul than the studio recordings ever were. An appearance of "Queen of Starting Over" from her retro-styled Music City Soul album was a pleasant surprise, as was the rather appropriate "Soul Survivor," her duet with Chaka Khan (obviously minus Chaka on this occasion).
Every performance of the night was infused with Beverley's trademark grit and determination, but if I had to pick standouts then they would have to be "Gold" and her cover of George Michael's "One More Try." "Gold" has long been a personal favorite of mine, and live she delivers it with such passion and feeling that it's hard not to be completely blown away. Backed by keys and a low-key guitar, it is the perfect showcase for her voice. Similarly, "One More Try" has that stripped-back arrangement that allows Beverley to let loose, and that she did, turning a five-and-a-half minute song into a 10-minute jam that would have destroyed the vocal chords of lesser singers.
On her latest album, and particularly the tour in support of it, Beverley has proven once and for all that she is a soul singer, one who occasionally dabbles in the realms of pop, but a soul singer all the same.