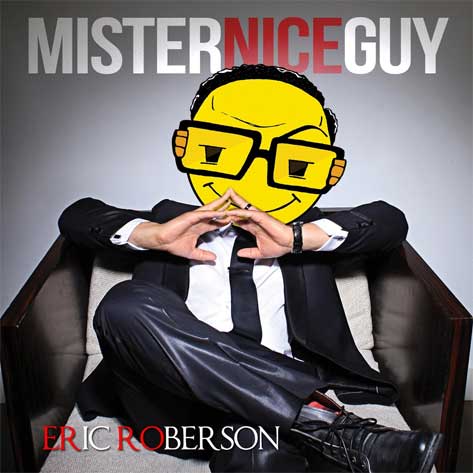 For the past 10 years, the name Eric Roberson has become synonymous with the indie soul movement, reaching across the country and the world one song at a time. With an unapologetic Errobession, I have witnessed his special brand of honest music first hand and am always amazed by his ability to connect with fans while actually making them a part of his musical journey. And the journey continues with the release of Erro's eighth album, Mister Nice Guy.

Mister Nice Guy opens quite fittingly with the title track, which sets a decidedly upbeat and positive tone for the album. "Mister Nice Guy" is a surprise banger that starts off with a slow ease as Erro croons, "Mr. Nice Guy yeah last to be thought about, first one she turning down." You are almost tempted to pity the nice guy that he sings of, that is until the beat drops and the song turns from a hopeless lament into a bold wake up call. And just exact who is Erro waking up? All of the ladies who continue to blindly choose Mr. Wrong over Mr. Nice Guy, that's who. There is one line that stood out to me that sums this up perfectly: "I really want you to be wifey. I can be Bill Cosby you Phylicia Rashad. Yeah, but she prefer Ike and Tina. I mean last dude I seen ya with, come on he's a dog. Man, am I too old fashioned? I'm talking about passion love everlasting. I'm asking, if I was a jerk would I be rewarded?" "Mister Nice Guy" could easily have been a woe-is-me rant, but the right choice of music and thought-provoking lyrics not only created an honest peek into the male perspective but an opportunity for further dialogue as well.

We are then introduced to "Strangers and Friends" a rather breezy song that possesses the same infectious catchiness that caught you with "Mister Nice Guy." "Strangers and Friends" transitions well into "Summertime Anthem," which was the first single off of the album, and features the legendary Chubb Rock. The lovely thing about "Summertime Anthem" is that even in the midst of autumn with old man winter breathing down our necks the songs instantly takes you right back to summer and all of its wonderfulness. I do wonder, however, if I'm the only one who can't help but giggle when Chubb Rock rhymes, "I see beads of sweat dripping down tummies, rectums in daisy dukes look yummy." Whatever happens to tickle your fancy, Chubb. "Summertime Anthem" and the visuals that accompany it are classic Erro at his best. After the bounce of "Summertime Anthem" we begin to feel a subtle shift in the tone of the album to a softer and slightly deeper place. It is as though with each song we progress further into the heart and soul of the album and perhaps Roberson himself. With 10 years as a successful independent artist garnering him the title "King of Indie Soul," Erro and the music he creates reflect the place he is in now as a husband, father, and musician unafraid of growth.

It is here at this turning point in the album that we hear the richness of "Come With Me" featuring The Ones, an immensely talented collaborative consisting of Khari Lemuel and YAW. The dedication of The Ones to create healing music in harmony with the positive focus of the album creates what just may be one of the most melodically beautiful songs on Mister Nice Guy. Erro's vocals blend effortlessly with The Ones as they harmonize, "In the morning just the splendor of the sunshine gets me up to go. I wake up and hear the song the birds are singing, how it moves me so." There is no way to listen to this and not have even the faintest smile on your face. And as you're smiling perhaps that special someone will find you picture perfect. (See what I did there?) "Picture Perfect," which features Phonte another SoulBounce favorite, oozes with compliments and has an un-apologetically romantic feel. We even hear Phonte singing after he blesses the track with a rhyme as though the song couldn't get any more swoon worthy. Then we have "Fall" that saunters in with an almost hazy sway all its own. While not one of the standout tracks, it is able to hold its own even as it comes on the heels of "Picture Perfect." From "Fall" we are given the honesty of "Shake Her Hand," which Erro has shared carries the wisdom of conversations with his father. It's always refreshing when an artist can share what they've learned and have that reflected in the music they create. With "Magician" and "Loves Withdrawal" we feel the emotion that he wishes to convey, but there is something that is lost in the music for these two tracks that leaves you wanting a bit more.

"How Would I Feel" featuring Jean Baylor (formerly of the duo Zhané) is a lovely example of this. The song is simply honest as Erro sings about the insecurities that get the best of him as he succumbs to the temptation of reading his lady's journal. I love the back and forth of his tortured thoughts as he sings "How would I feel if she were going through my email and searching through my phone?" Many of us can relate to these most human of emotions, and Jean wonderfully expresses the perspective of one whose trust has been broken. From the emotional honesty of "How Would I Feel" we hear the slightly playful almost tongue-in-cheek "Talking Reckless," which is followed up by "At The Same Time," a song delightfully reminiscent of Erro circa The Vault 1.0.

And then we come to "Male Ego" featuring Hezekiah, which has become one of my favorite songs on the album. Hezekiah strikes a rather profound chord, as he rhymes, "See I try not to treat women like objects, but end up treating objects like women." In this case, having a big ego is something to be warned against instead of praised as Erro sings, "Fellas, don't wait till tomorrow. If you got a good one, yo, let her know. All that tough talk let that go. Do you want to lose the girl cause of your male ego?" Mister Nice Guy ends on a loving note with "Try Love" and the very emotional gospel number "All For Me."

Mister Nice Guy has a very different feel from what we have heard from Erro in the past with an ever present theme of love, appreciation, and positivity with hints of playfulness, this album was able to achieve a beautiful balance of love, life, and all that lies in between. Eric Roberson essentially does what he does best, which is to create the music we live our lives to, once again reminding us why he remains such a beloved favorite of so many, and that nice guys really can finish first.