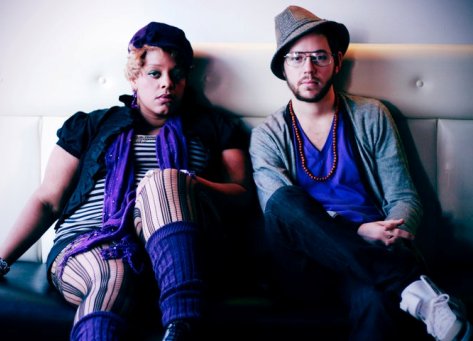 The first thing that struck me and ultimately made me check out Seattle-based duo Fly Moon Royalty was their name. Formed in 2010 and comprising singer Adraboo and DJ/producer/emcee Action Jackson they originally went by the name Sugar Water Purple, however after discovering that it was already taken they settled on the quirky Fly Moon Royalty instead. The pair's self-branded "electrosoul" style has drawn comparisons to the likes of Gossip, Janelle Monáe, and Gnarls Barkley (I would add HEAVy to that list, too) and secured them a deal with the predominantly hip-hop focused label, Sportin' Life Records. Their self-titled, 10-track album has already produced the buzz single "Lemonade," gained them a slot supporting Sharon Jones & The Dap-Kings (a curious choice if ever there was one!) and earned them a place on the "top 10" lists of various DJs/taste-makers. The full album, as well as a few bonus freebies and remixes, can be heard via their Bandcamp page, but you can check out my personal favorites, "In The Woods" and "Android Love" right here.
Center