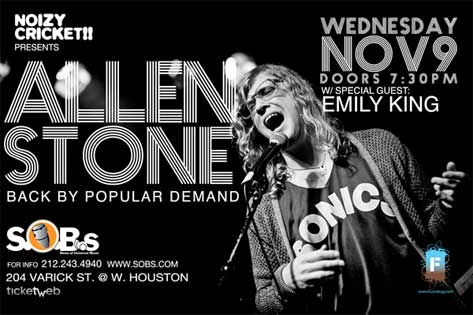 After wowing national television audiences last week on Conan, more and more people are hopping on the Allen Stone train. But if you live in New York City and frequent S.O.B.'s, then you might already be up on this blue-eyed soul phenomenon because he's played there numerous times. And if you've missed his previous appearances there, don't worry because he's coming back by popular demand on Wednesday, November 9th. Not only will Stone be performing that night but so will soul songstress Emily King in a return engagement there as well. Is it even a question if you need to be in attendance at this show if you live in NYC? Maybe a pair of free tickets that we're giving away will sweeten the pot? Entering to win them is easy as one-two-three after the bounce. Tickets may also be purchased at the S.O.B.'s box office or online at TicketWeb.