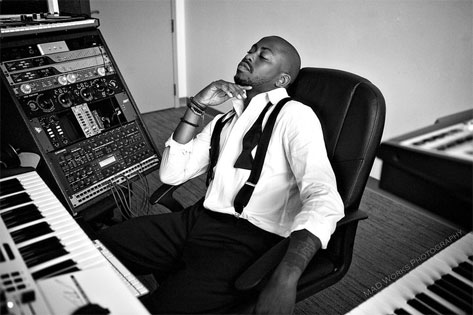 Raheem DeVaughn, the one-time "R&B Hippie Neo-Soul Rock Star," might as well adopt a new nickname: King of the R&B Mixtape. I've seriously lost count now of how many he has already released and there are no signs whatsoever of him slowing his roll with the impending release of Jackin' 4 Beats, Vol. 3 right around the corner. The first volume dropped last November and somewhere in between then and now Vol. 2 hit the streets, and Raheem is currently prepping a slew of jacked tracks for the latest installment of the series. To give us a sample of what we can expect on Vol. 3, DeVaughn has leaked two tracks for our listening pleasure...or not. I say that because one of his beat jacks is hot -- his take on Wale and Miguel's "Lotus Flower Bomb" -- and the other -- his flip of Big Sean's "Marvin Gaye & Chardonnay" -- is not exactly my cup of oolong. Raheem sounds good on his sexed-up version of "Lotus Flower Bomb," so good that it makes you wonder why Wale didn't use his DMV homeboy on the track instead of Miguel. While you ponder that, take a sip of Rah's "Ciroc & Marvin Gaye" featuring a verse from Phil Ade and see if you can stomach it. If nothing else, I definitely applaud Raheem's creativity and grind, neither of which stop, but I would prefer that he focus on his next long player, Welcome to Loveland, and perfecting his own original tunes instead of continuing to sometimes miss the mark with other people's hits.
Center