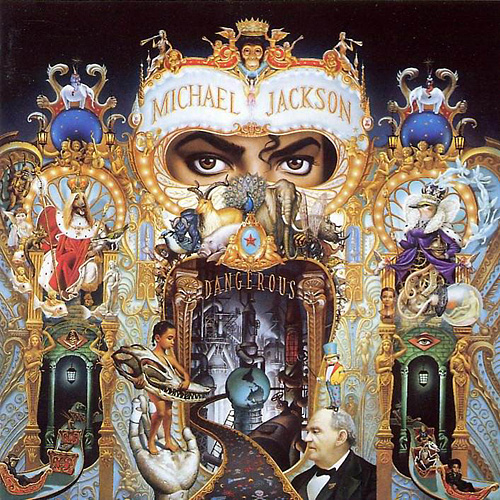 As an addition to Michael Jackson's commercial catalog, Dangerous was doomed from the jump. As the first product delivered under Jackson's record-setting $65-million contract with Sony, it was meant to restore him to juggernaut form after the relatively disappointing sales of a previous album. That "disappointment" won two GRAMMYs and became the first album ever to yield five U.S. number one singles. Talk about pressure.

Add to that, the fact that the world, led by jaded Gen-Xers, was descending into the Grunge-fed apathy and world-weariness that despised anything commercial or mainstream -- especially Jackson, the human embodiment of the commercial mainstream. Naturally, this meant the very same youth demographic that had just years before deified him now was itching to see him fall.

Yes, his youth audience from the Bad era was growing up. And one of the clearest markers of adolescence is the rejection of what you'd lived for just a nanosecond earlier, irrespective of its actual quality. (Seriously, I bet Viennese teens cringed at the thought of ever having enjoyed Mozart and his shlocky, juvenile work.) That's the only way I can explain my own personal anti-Michael backlash in the year surrounding Dangerous. A rabid fan only five years prior, I'd now grown irritated by the messianic figure he'd come to see himself as. From the shots of him leading various armies around the world, to the convulsing fans, to the angel stunt he worked into his stage show (which, for the record, I still find a little sickening), it's like he was running for Jesus 2.0 with Leni Riefenstahl as his campaign manager.

But try as I might to fight it, I found myself all too excited when I finally got the Dangerous cassette in my hand. Mike had just rocked the world with the debut of his "Black or White" video, which helped propel the cut to number one on the Hot 100. But its cutesy, guitar-driven pop was far from representative of the album. You see, Michael had gone and switched it all up by drafting Teddy Riley to help produce a New Jack Swing album. And that's where Dangerous is most significant in the insanely, hit-packed space that is Michael Jackson's catalog. For everyone pissed off at the "not gonna spend my life being a color" line, for everyone holding up a caliper to his nose and a paper bag to his face, for everyone who cracked the tired "rich white woman" joke, Dangerous was a defiant fist raised high in the air. Yes, folks. Dangerous is easily the blackest album in the Michael Jackson catalog.

Sure, the album's Riley-crafted cuts like "Jam" and "Dangerous" were clear in their New Jack origins (with the album boasting no fewer than three tracks with rap verses), but it was the one-two punch of second and third singles "In The Closet" and "Remember The Time" that set colored folks' hearts aflutter. "Closet," a track as hot and sticky as Brooklyn in July, with a video that made you wonder just how long a woman's legs could possibly be (even if that woman was Naomi Campbell), was by far the hottest thing the painfully asexual Jackson ever committed to record and film.

And there was "Remember The Time," easily the greatest work of Riley's career, yet fully eclipsed by its star-studded video, directed by John Singleton. With star turns from Iman, Magic Johnson, and Eddie Murphy...hell, you didn't have to be black to be completely enraptured by this video. But consider the fact that a big-budget music video depicted mankind's oldest civilization, in all its opulent glory, as populated by dark-skinned people -- a stance present-day historians are loath to accept.

Now, imagine this coming from Michael Jackson after years of rumored black antipathy. It was like a late-20th-century version (by way of ancient Egypt) of Imitation of Life with Michael as Sarah Jane, publicly proclaiming his love for black folk as he flung himself tearfully on the sarcophagus of blackness.

Unfortunately, even with the album's perfect balance of New Jack stompers, moody midtempos ("Who Is It," "Give In To Me"), and tear-jerker ballads ("Heal The World," "Gone Too Soon"), Dangerous ended up something of a commercial disappointment. Like I said, it had a bunch of factors that doomed it to this fate from the start -- from stratospheric expectations to the Grunge phenomenon. But in the end, it was that first, infamous child molestation scandal that altogether derailed the trajectory of both the album and tour, as well as Jackson's career and life.

This is not the place to comment on whether I think he did it, or if he deserved his resulting fall from grace (spoiler alert: no and no), but rather, to discuss the album purely as a work of musical art and a snapshot of its time. And on those terms, Dangerous deserved to be a far greater hit than it ended up.

Now, 20 years later, with Michael gone and his death a continued media spectacle and his legacy a prolific cash-cow, all we can do is throw on this album and remember the time.